Fun and games for Children’s Day:Fun for kids

Fun and games for Children’s Day:Fun for kids 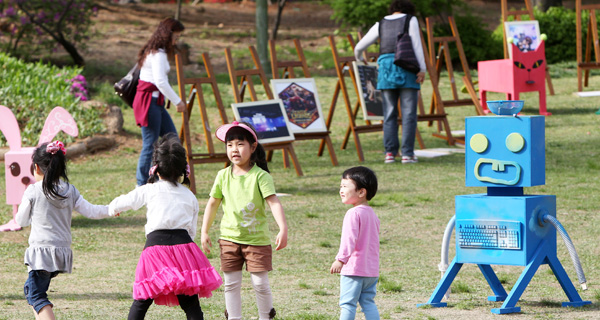 A group of children play at Lawn Square of Seoul Children’s Grand Park, the venue for this year’s Seoul Fairy Tale Festival. The festival runs until tomorrow and will present fairy tale performances and an interactive book-making program. [YONHAP]


With May upon us, it’s time to head outside and enjoy the sunshine with our families. And since today is Children’s Day, there will be an especially large number of activities to enjoy.

While many will think about going to amusement parks to ride roller coasters or simply heading to a nearby park for a stroll, there are many other options for families looking to try something a little different and avoid the crowds at the same time.

Almost every city and county in the country will hold special events for Children’s Day, so just a little bit of research can go a long way in figuring out which festivals would be most interesting for your family.

Among the events offered today and tomorrow for the holiday and beyond, the Korea JoongAng Daily picked a select few and divided them into four categories: educational, fun, traditional and floral.

Sometimes kids just want to have fun, and there will be plenty to do if you’re just looking for a relaxing time with your little ones.

What would be more suitable than taking your children to Seoul Children’s Grand Park on Children’s Day? And this year, the very first Seoul Fairy Tale Festival will be waiting on the park’s Lawn Square .

The content of the festival is diverse. Visitors can see performances of fairy tales from all over the world that include narrations by their authors and other high-profile figures. Today, the cast from KBS2’s hit entertainment show “Chat with Beauties,” where foreigners talk about Korea, will narrate fairy tales.

There will also be a taekwondo performance, a bubble show and songs presented by the Little Angels Children’s Choir.

A one-hour parade starts at 2 p.m. today in which dancing teams from Hawaii, Spain and Russia will move from the park’s main gate to Fountain Square and then Lawn Square.

The new festival is the product of two years’ work and has been planned in detail by fairy tale experts, including international scholars from the United States, Japan, China and Malaysia.

More than 250 people, including authors of fairy tales, have closely worked with a budget of 200 million won ($176,800) to create a total of 70 programs, including exhibitions, performances and academic lectures for parents.

Many events will be held inside the park, though some are located in Gwanjin Square, which is outdoors.Each program has its own operating hours, with the earliest staring at 10 a.m.

Officials from the Seoul Metropolitan Government expect that more than 500,000 people will visit and recommend using public transportation as the easiest way to get in and out because of the anticipated crowds. The nearby subway station is Grand Children’s Park on Line 7.

At Imjingak park in Paju, Gyeonggi, that typically attracts visitors headed to the North Korean border on tours of the Demilitarized Zone, there will be a large children’s festival that is now entering its fifth year.

The Imjingak Children’s Festival is the largest free event in Korea that takes places on Children’s Day, and last year, it drew 120,000 visitors, according to organizers.

Today, visitors can enjoy the hit children’s musical “Pinocchio” along with a military parade and a taekwondo performance. Tomorrow, concerts of children’s music dominate the schedule and folk music will play throughout the venue.

Other programs include fire safety training by active-duty firefighters, postcard writing and a children’s bazaar.

During the festival, tourism officials will be on hand at promotion booths to provide information about 31 cities and counties in Gyeonggi in hopes of attracting more tourists to the province. One event expected to be in the spotlight is the 2012 Gyeonggi Global Aviation in Ansan, which is planned for October.