Depositors rush to yank out savings

Depositors rush to yank out savings 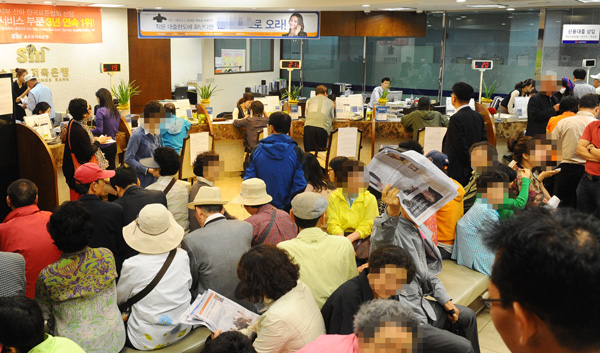 
It was 9 a.m. - the start of normal banking hours - but 240 customers had already taken numbers to withdraw their money from the main branch of Solomon Savings Bank in Daechi-dong, southern Seoul, yesterday.

“Even if [deposits] less than 50 million won [$44,200] are protected [by the government], I can’t live in anxiety for months before I’m able to get it back,” said a 77-year-old man surnamed Kim, who had been waiting since 7 a.m. to withdraw 36 million won from a time deposit account.

After news spread Thursday of more insolvent savings banks possibly facing closings this weekend, customers rushed yesterday to withdraw money from banks rumored to be on the chopping block despite the government’s attempts to reassure them.

Stock prices of troubled savings banks tanked on the local bourse, and savings bank managers turned up the volume on complaints that regulators’ frequent and unpredictable reviews had not given them a fair chance to turn their operations around.

As the last business day before regulators reportedly decide the fates of five debt-laden savings banks, thousands of worried customers descended on branches of savings banks rumored to be on the shortlist of possible suspensions yesterday.

At the Daechi-dong branch, more than 2,000 customers visited by 3 p.m. despite the branch being able to only serve 400 customers a day.

There were even spillover effects at savings banks not rumored to be in danger. The Cheongdam-dong, southern Seoul main branch of Hyundai Swiss Savings Bank reported some 400 visitors at the end of business hours yesterday - more than five times the daily average - despite broadcasting on their Web site and Twitter that the bank is not at risk of suspension.

The Korea Deposit Insurance released a statement early yesterday pointing out how much interest gains a theoretical depositor would lose if he withdrew money before a time deposit account came to term, while savings banks staffers pleaded with customers to rethink emptying their accounts by emphasizing the government guarantee for deposits less than 50 million won.

“I ask that [depositors] wait and see for a little while longer, as withdrawing before a time deposit account matures can actually cause a depositor to lose interest returns,” said Chairman of the Financial Services Commission Kim Seok-dong yesterday. “We are continuously monitoring the situation as we heard that withdrawals are continuing at a savings bank.”

Solomon Savings Bank continued a three-session losing streak to close at 1,135 won, dropping 35 percent from a week ago, while Korea Savings Bank also dropped by the daily limit of 15 percent to close at 2,275 won.

Savings bank officials stepped up their complaints that regulators “set them up to fail.” Some of the claims by officials suggest the Financial Supervisory Service conducted overly frequent reviews with shifting criteria and the banks were unable to carry out turnaround plans.

Lim Suk, chairman of Solomon Financial Group and a major shareholder of Solomon Savings Bank, told local media Wednesday that “if regulators apply criteria as they do now, no savings bank would be able to survive,” asking for more time to secure outside financing “if only to secure the livelihood of 4,000 employees.”