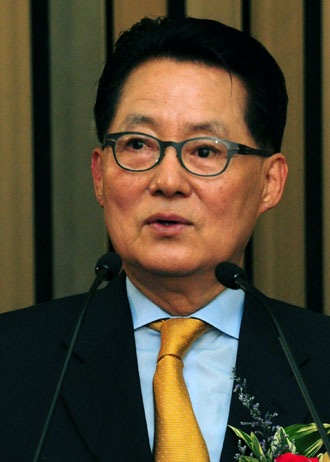 The 69-year-old Park won a narrow victory to become the new floor leader of the DUP against Yoo Ihn-tae, a Roh Moo-hyun loyalist, in the final round of voting. The party’s 127 lawmakers-elect cast ballots in the floor leader election.

In the first round of voting, none of the four candidates won a majority and Park and Yoo moved forward for a final contest. Park won the position with 67 votes while Yoo won 60. “As a warning to me to perform my duty well, the lawmakers-elect cast the votes in a golden ratio,” Park said yesterday. “I believe it is intended to stop a runaway while prompting a balance of power.”

In his acceptance speech, Park also stressed that the party’s four largest groups - the labor community, the civic groups and Kim and Roh factions - must unite to win the presidential election in December. Without using the Federation of Korean Trade Unions’ organizational power, it is hard for the DUP to win, he stressed. He also promised that he will transparently manage the June 9 leadership election of the DUP as acting chairman.

Park’s victory came amid the party’s internal conflict over the Kim and Roh factions’ secret arrangement to split power.

Moon Jae-in, former chief of staff for Roh Moo-hyun and the presidential frontrunner of the party, Lee Hae-chan, former prime minister of the Roh government, and Park, former chief of staff of the Kim Dae-jung Blue House, agreed that the Roh faction will support Park in the floor leader election, while the Kim faction will support Lee as the chairman at the June 9 leadership election of the DUP.

It still remains to be seen if the scenario will hold up and Lee will be elected as chairman. After the reports about the power-split deal, reformists inside the party fiercely criticized the practice. Park’s imminent task as the acting head will be finding unity of the largest opposition party.

Known as the closest associate of the late President Kim, Park is one political heavyweight representing the Jeolla region. He first met with Kim in the United States in the 1970s during Kim’s exile and joined politics to accompany him. He began his lawmaker career in 1992 as a proportional representative. He won the second term in 2008 and succeeded in reelection in the April legislative election.

He was jailed in 2006 for having paid the North to arrange Kim’s historic 2000 inter-Korean summit, but was pardoned and reinstated in 2007.

He served as the floor leader of the DUP last year, and it is his second time serving the powerful post.