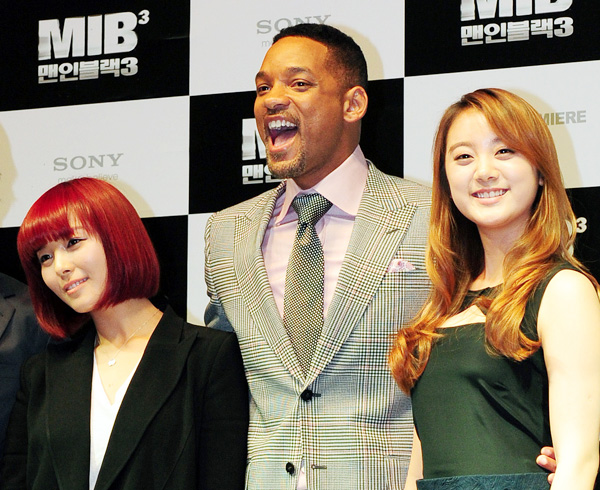 In Korea for the world’s first screening of “Men in Black 3,” Hollywood actor Will Smith chatted with Sunye and Hyerim of the Wonder Girls at a press conference and red carpet event on Monday held at Times Square in Yeongdeungpo District, southwestern Seoul.

Pictures of the stars in conversation surfaced online, sparking much buzz among netizens about what they could have discussed.

Yesterday morning, one of the most-searched queries on various Korean Web portals was “Sunye English skills,” as photographs show Sunye at ease, talking to Smith without an interpreter in sight.

At the press event, Smith expressed his fondness for the Korean girl group by saying, “My daughter loves the Wonder Girls and I’d love to be a featured artist on one of their tracks later on.”

This isn’t the first time that the Korean girl group and the Hollywood movie star have crossed paths. Last month, Smith was host of the 2012 Nickelodeon Kids’ Choice Awards and announced the Asian Act of the Year, a category for which the girls were nominated.