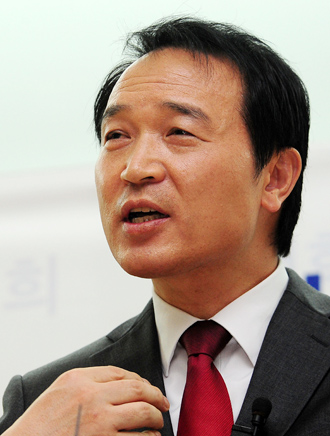 A former chief of staff to President Lee Myung-bak urged ruling party chief Park Geun-hye yesterday to play the role of a “kingmaker,” a surprising remark seen as a call for the leading presidential hopeful to step aside and help someone else become president.

Yim Tae-hee, a veteran politician who worked as chief secretary to Lee in 2010-11, made the appeal as he formally announced his presidential bid, stressing that Korean politics have been badly divided along regional and ideological lines for too long and it is time to change that paradigm.

Deep-rooted regional rivalry has shaped Korean politics for decades, dividing the staunchly conservative “Yeongnam,” or Gyeongsang provinces, in the country’s southeast and the relatively liberal “Honam,” or Jeolla provinces, in the southwest.

Park represents the Yeongnam side and Yim suggested her election as president would amount to continuing an outdated political framework that should be broken to move the country’s politics forward, and that someone belonging to neither side should be chosen instead.

“I propose to Chairwoman Park, please play a role in shattering this outdated political framework that has existed over the past 40 years,” Yim said during a news conference. “What is politically needed the most is [for Park] to play the role of a kingmaker.”

Yim was vague on whether he was specifically asking Park to drop her presidential ambitions, only repeating his call for shattering the old political framework and starting a new era of politics unfettered by such rivalry.

Yim, 56, a former three-term lawmaker, is one of a series of ruling Saenuri Party members to reveal presidential ambitions recently. Three others, including Gyeonggi Province Governor Kim Moon-soo and Representative Chung Mong-joon, declared their bids in recent weeks, and one more is expected to do so in the coming weeks.

All trail far behind Park in popularity ratings, although she has not yet declared her candidacy.

The contenders have all called for changing the rules of the party’s presidential primary election to reflect the choices of non-party members also.