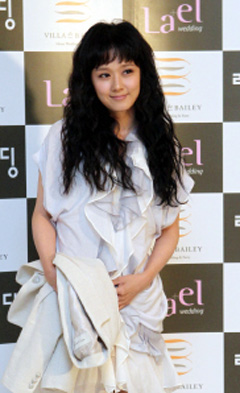 Jang Nara is to make a special appearance in a Chinese movie starring Jaycee Chan, the son of famed Chinese actor and martial artist Jackie Chan. Chinese actor Zhao Qing will also star in the movie.

In the movie, entitled “Love Somebody,” Jang will play the role of a career driven woman who falls for a guy and finds herself in the middle of a dilemma.
Jang has been in China since May 4 for filming and will showcase her exceptional Chinese skills in the film.

“She was an exceptional actress. We are currently in talks of a sequel and would like to have Jang on board again,” said a representative from the movie.
Meanwhile, “Love Somebody,” will open at the same time as Jang’s first Chinese movie, “Flying with You,” set to open later this year.