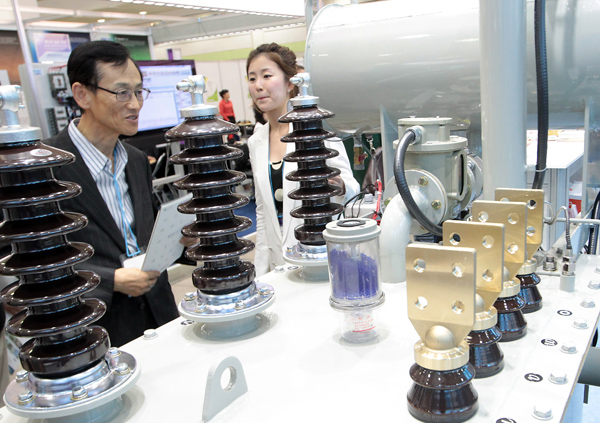 
After the country suffered a major power blackout last year and watched Japan turn away from the nuclear power it has relied on for decades, the focus is shifting from finding ways to generate large amounts of power to efficient management of power resources.

Enter the so-called smart grid. Korea is one of the few countries that has already adopted the concept and is testing the system out. However, some analysts argue that the government needs to be more aggressive in pushing forward the development of a smart grid system.

The Ministry of Knowledge Economy first introduced a long-term plan for a digital system for electricity supply, dubbed the smart grid, in 2009. It’s set to announce a more specific five-year plan at the end of this month.

The larger framework will stay the same: efficient energy use and further commercialization of new technologies. The detailed plan will shed more light on how that will be done, including the development of battery systems with larger capacities that can store energy for homes and factories, according to the official at the Ministry of Knowledge Economy.

A smart grid is a digitally enhanced electrical grid that gathers, distributes and acts on information about both electricity providers and consumers in order to improve the efficiency of electricity services. It is supposed to minimize the waste or loss of electricity in the course of its delivery.

“Many people still are not familiar with the idea and it will take time for the system to be widely commercialized,” said Son Jong-cheon, director of the Korea Smart Grid Institute’s policy planning team. Currently, there is one town testing the technology on Jeju Island, and other small test centers across the nation.

The system will better predict energy demand of each type of consumer, including homes, office buildings and factories, and prevent the kind of blackout that occurred last September due to a spike in electricity demand.

The smart grid will also encourage the commercialization of renewable energy sources such as wind or solar power. Those naturally generated sources depend on fickle weather conditions.

“It would not be exaggerating to say the future of commercialization of those kinds of energy depends on the successful establishment of a smart grid system,” said Son. 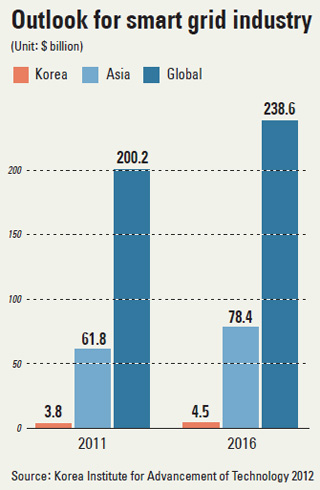 The town of Gujwa in northeastern Jeju last year became the only full test of a smart grid in the world, according to Son, and it’s become a popular destination for experts from other countries interested in the technology.

Around 6,000 homes are on the smart grid system and 168 companies are testing the grid’s technology, including the power company, telecommunications companies and even automobile and home appliances companies.

As of last month, about 270 billion won ($236 million) was invested and the companies involved in the project include SK Telecom, KT, LG Electronics and GS Caltex.

According to the official at KSGI, many homes have seen reductions in their electricity bills, but he did not disclose the exact percentage.

“Some families actually have seen jumps in their electricity bills in recent months because they bought more electric devices after their bills went down in earlier months,” said the official.

“It is important to see if all the related systems are connected smoothly and successfully to share signals with one another,” said Son. “Although it is hard to say every single test is going successfully, it does mean something that we put almost every technology needed to the test.”

Last month, the town welcomed Lieutenant Governor of Hawaii Brian Schatz and a group of Algerian public officers who are currently training at the Korea Development Institute.

Delegations from 13 South American countries, including Brazil and Chile, and the Inter-American Development Bank also visited.

Representatives of the World Bank and Jordan are also scheduled to make a visit to Korea Monday to learn more about Korea’s smart grid system.

“Since Korea has constructed many power plants in Jordan, the Koreans have earned an image as a leading country in electric power plants,” said Kim Seong-mo, an official at the knowledge economy ministry’s smart grid division.

“So the World Bank is coming with Jordan’s representatives to learn more about Korean smart grid technology.”

There are still many limits to the test. Jeju doesn’t have high-rise buildings, so they’re not included in the test. And Korea won’t be able to share its grid with neighboring countries because of its geopolitical position.

“We will do partial tests in urban areas and will continue to put more focus on the overall network installation,” said Son of KSGI.