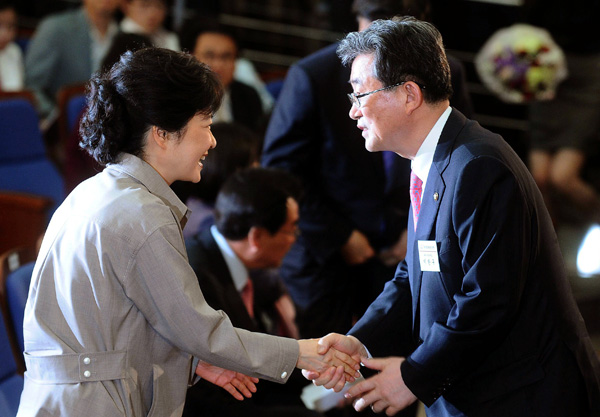 
Representative Lee Hahn-koo, a four-term lawmaker thought of as the economics tutor of Park Geun-hye, was elected as the Saenuri Party’s new floor leader yesterday, in a clear display of the conservative ruling party’s determination to back Park’s presidential bid.

Lee pulled off a come-from-behind victory in the final round of the election, through which the party also elected its chief policy maker and Lee’s running mate, Representative Chin Young. 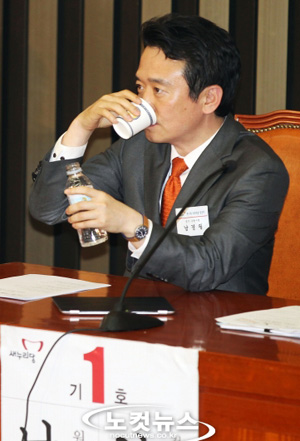 In the first round, 141 of the party’s 150 lawmakers-elect voted. Nam Kyung-pil ticket received 58 votes, while Lee Hahn-koo ticket won 57, and the two tickets advanced to the final round as neither won a majority.

In the final match, 138 votes were cast, and Lee-Chin ticket received 72 to win.

The victory of Lee was seen as a result of the growing influence of Park loyalists inside the party. About 80 percent of the newly elected lawmakers, whose term will start at the end of this month, are seen as friendly to Park.

Through the April legislative election, 76 political rookies from the Saenuri Party will begin their first legislative terms, and most of them are also seen as Park loyalists.

The outcome was seen as a natural process for the Saenuri Party, as Park is a clear frontrunner in the December presidential election. After his victory, Lee said, “I will sacrifice myself for our presidential victory.”

Chin also said he will respect the fellow lawmakers’ opinions and work hard for the party’s presidential victory.

“They were elected to important positions at a critical time,” Park said after the election. “I hope they steer the party well.”

A native of Gyeongju, North Gyeongsang, the 66-year-old Lee is a veteran policy expert elected to his fourth term in the Suseong A District of Daegu in April. Among the incumbent lawmakers, he is the only member of Park’s think tank, the National Future Institute.

Nicknamed “Park’s economics tutor,” he is expected to perform the role of the architect of her economic pledges for the presidential election. A graduate from the Seoul National University, he passed the civil service exam in 1969. After serving the Finance Ministry and the Blue House, he joined the Daewoo Group and worked at the Daewoo Economic Research Institute.

He joined politics in 2000 at the invitation of the then-GNP presidential candidate Lee Hoi-chang. Known for his conservative economic philosophy, he promoted “making Park the president” as his key pledge for last month’s legislative elections. He has also said his goal as the floor leader is to support Park’s presidential bid.

“Chin and I are both really well-connected to Park,” Lee told reporters yesterday. “But we have not participated in factionalist splits in the past. We are both close to the Lee Myung-bak loyalists as well, and we also respect the reformist lawmakers’ opinions.” Lee said his top priority will be the unity and harmony of the party. “We can only win the presidential election if we reconcile our differences and combine energy,” he said. “If our internal split continues, people will never forgive us.”

Representative Chin, 61, is from Gochang, North Jeolla. A three-term lawmaker representing Yongsan District of Seoul served as Park’s chief of staff from 2004 to 2005 when Park was the chairwoman of the Grand National Party.

He shortly defected to support Representative Lee Jae-oh, a key rival of Park, in 2010, but he appeared to restore his ties to the Park faction by becoming the chief policy maker.