Subway line No. 9 fare not being raised just yet

Subway line No. 9 fare not being raised just yet

The company raised the white flag after facing fierce opposition, declaring that the new fare system will be renegotiated with the city government once again. 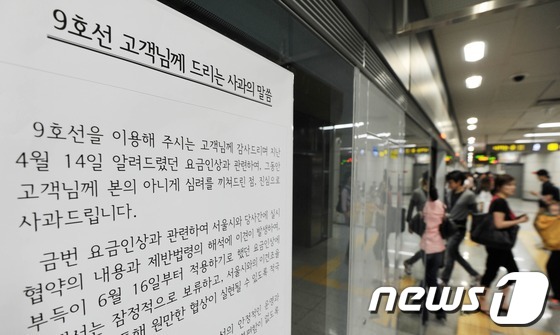 “We sincerely apologize to Seoul citizens for generating such confusion,” the corporation said on their official Web site. “We realized that there are different views on the contract we have made with the city government, so we will temporarily postpone the new fare system plan and reopen the negotiating table to reach an amicable settlement. We also promise to our customers that we will run the line safely and serve them more sincerely.”

On April 14, the corporation, which constructed and currently runs the line, abruptly announced that the fare will be increased from the current 1,050 won to 1,550 won.

It explained that the adjustment is necessary because they need to make up 182.9 billion won in financial losses that have been accruing since 2009.

The corporation insisted that negotiations with the city government in the last few years have made no progress, which led them to raise the fare autonomously. However, the attempt was suppressed by the city government. In the press briefing held a day after the corporation’s new fare system was announced, Seoul said that a new fare system can’t be implemented unless it is authorized by the mayor.

The city put pressure on the company by informing them that they will organize a hearing against Chung Yun-kook, the CEO of the corporation.

Earlier this month, the city government also sent a written inquiry consisting of 48 questions which demanded they explain the unilateral decision, and warned that they might consider breaking up the contract with the corporation.

Though subway line No. 9 is owned and run by private investment, the city government is allowed to intervene in the line’s management because subway service is categorized as a public service that is directed and supervised by the government.