Sachs talks on growth and need for sustainability

Sachs talks on growth and need for sustainability 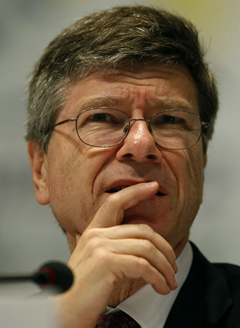 Noted economist Jeffrey Sachs said that Asian nations’ dramatic growth is unsustainable at the current rate unless the quality of growth - including social inequality and environmental conservation - is improved upon.

Visiting Korea to speak at the two-day Global Green Growth Summit 2012 ending today at the Lotte Hotel in central Seoul, Sachs outlined his views yesterday on economic growth of differing speeds in advanced and developing economies during a launch event for this year’s economic and social survey conducted by the UN Economic and Social Commission for Asia and the Pacific.

“The main pole of the growth world [had been] the high-income North Atlantic economies which dominated the world economy for so long, [and] there is a question of whether this quite divergent growth rate can continue,” he said. “My own view is that [it] can.”

“[There] has been a question mark whether the slowdown China is experiencing will turn into an end of the bubble and a hard landing,” he said. “My view is that China will continue its growth, and it is also the view of an increasing number of observers who were somewhat worried perhaps a few months ago that there could be a hard landing.”

However, Sachs noted the disconnect between the quantity and quality of Asia’s economic growth.

“The quality of growth of Asian economies is not what it should be to deliver the maximum benefits of well-being, either in the short term or the long run,” Sachs said.

“Asia, like almost all parts of the world, experiences widening inequalities [such as] a significant increase of income inequality,” he said.

Sachs also pointed to the survey’s findings on rising commodity prices as a result of “development of the old style” without a thought given to environmental sustainability.

“If quality of growth - both social inclusion and environmental sustainability - is not addressed, then certainly the underpinnings of this growth will weaken seriously.”