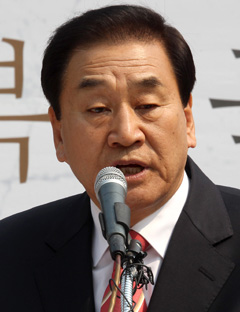 Representative Lee Jae-oh, known as the kingmaker of President Lee Myung-bak, announced yesterday his official bid to join the presidential primary of the ruling Saenuri Party, making an ambitious pledge to introduce a four-year presidency with the possibility of re-election.

The 67-year-old veteran politician told the JoongAng Ilbo in an exclusive interview in April about his presidential ambition. Yesterday’s press conference reconfirmed his plan.

Stressing the need to realign the timing of the legislative and presidential elections, the five-term lawmaker said in a press conference that he is willing to serve as president for only three years if he is elected.

As of now, a lawmaker serves a four-year term and a president serves a single five-year term. In recent years, Lee has been an active promoter of amending the constitution to introduce the change.

“After 1987, we’ve accomplished democracy in its procedure and formality,” Lee said. “But because of the structural problems that come with a single, five-year presidency, our democracy remained immature in terms of its contents.”

Then, Lee presented five key pledges, including the constitutional amendment to introduce the four-year presidency with a possibility of re-election.

“If I am elected president, I will complete the constitutional amendment within six months of inauguration,” Lee said. “And I will shorten my term to three years to have the legislative and presidential elections on the same year, starting 2016.”

He also pledged to cut the number of lawmakers to 200 from the current 300 and establish an inter-Korean liaison office.

He also promised to root out corruption from society and resolve the widening wealth gap.

“I don’t think I am morally perfect, but I have tried my best to keep integrity in my life,” Lee said.

“I want to run for president to realize my foreign affairs vision of the northeast Asian community of prosperity and peace and political vision of a liberal democratic community.”
By Ser Myo-ja[myoja@joongang.co.kr ]