At dance festival, the spotlight is on ballet a la francaise

At dance festival, the spotlight is on ballet a la francaise

French troupe Ballet Preljocaj’s “And Then, One Thousand Years of Peace” will be presented on May 30 and 31 at 8 p.m. at the National Theater of Korea during this year’s International Modern Dance Festival. By Jean-Claude Carbonne


Contemporary dancers from Europe, Asia and other parts of the world have been coming to Seoul to participate in the International Modern Dance Festival (Modafe) for the past 31 years. This year, however, organizers decided to try something different and focus on collaborating with France, kicking off the festival with a “FranKorean Tale,” a joint French-Korean production. 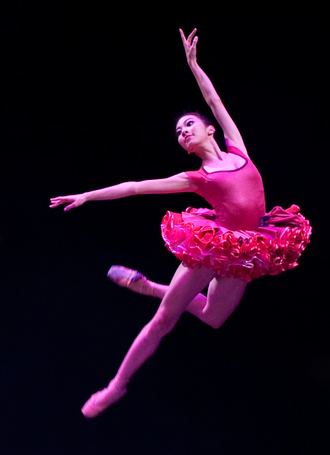 Dance Company with Jo Ju-hyun will present “Inspiration III” at 8 p.m. on May 23 at the Arko Arts Theater. Provided by the organizer

The opening performance, choreographed by Frenchman Thomas Lebrun, combines two folk tales from each country. For the Korean folk tale, organizers picked “The Sun and the Moon,” often referred to as “The Sun Girl and the Moon Boy,” while the “Little Red Riding Hood” was selected as the French folk tale. The choreographer looked for a common theme in the two traditional stories to combine them into one performance that will be accompanied by shamanic music from Jeju Island. Interpretations of the stories from Korean to French and vice versa will be provided for the audience.

“The idea is to choreograph the two stories separately, with the same dancers, then intermingle and embark on a new writing from the previous two .?.?. like inventing a new tale combining our two cultures,” according to the press release.

Planning for the cross-cultural performance was truly an international affair. 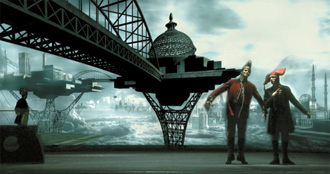 “Stand Alone Zone” will be presented by French group Systeme Castafiore at 7 p.m. on May 27 at the Daehangno Arts Theater. By Karl Biscuit

“For this year’s opening performance, the two parties stayed together in Korea for two weeks for the production process and then moved to France for choreography for 10 days,” said Choi Sang-cheol, vice chairman of the Modafe organizing committee, during a press conference last week. “We expect this performance to contribute greatly to the exchange of cultures between the two countries.”

Choi also said that “France is paying great attention to Korean dancers,” adding that most French dance troupes include at least one Korean dancer these days.

“They are also showing interest in the rapid development of Korean dance and even Korean culture,” he explained. “We are looking into developing various collaborations between France and Korea.”

Choi picked the French performance “And Then, One Thousand Years of Peace,” by French choreographer Angelin Preljocaj, as the most noteworthy among many on the festival’s schedule.

“The performance is a well-known masterpiece. The choreographer, Angelin Preljocaj, is one of the most renowned choreographers in France,” Choi said.

An Algerian performance “Nya” by La Baraka Company is also drawing interest as the company picked up disadvantaged teenagers who were wandering around in Algeria and trained them for a year to become dancers. The training process was carefully recorded and turned into a documentary film.

“As a social community project, the La Baraka Company opened up a new path for youths through dance, and the performance is very significant because the company was able to turn those teenagers into professional dancers,” Choi noted.

Aside from France and Algeria, performers from Spain and Israel were also invited to participate in the international festival.

As for the domestic groups schedule to perform, 13 teams were selected to present various forms of dance, including modern dance, contemporary ballet and Korean traditional dance.

There will also be a competition during the festival, according to organizers, under the title, “Spark Place,” which will be used as an opportunity to highlight talented Korean dancers. A total of nine domestic teams will participate.

And given the rising interest in French-Korean dance collaborations, Modafe will likely be only the first of many joint projects between performers from the two countries.

“This year’s Modafe will also introduce many French performances to the country,” said Han Seon-sook, chairwoman of the Modafe organizing committee, who is also the president of the Contemporary Dance Association of Korea. “But outside of Modafe, we’ve decided to collaborate with France from this month to hold various festivals together.”