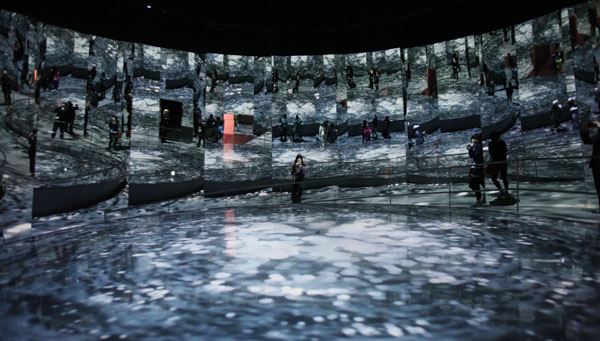 Exploring the theme “The Source. It’s in your hands,” the Switzerland Pavilion gives the visitors the experience of an ice core, extracted from a Swiss glacier, to stress its message - the importance of water resources. By Kim Do-hoon


YEOSU, South Jeolla - A long line formed in front of the U.S. Pavilion. People filed into a dimly lit hall one after another, some obviously disappointed at the hall’s size.

The space didn’t seem to match up with the pavilion’s much promoted 1,237-square-meter total area, which seemed empty.

But then graphics of waterfalls and underwater animals splashed across the walls and the sound of water filled the hall.

Video messages from U.S. President Barack Obama and U.S. Secretary of State Hillary Clinton made it seem like they were standing right next to the visitors. Videos that displayed interesting stories of individual Americans were screened in the next hall over.

Over the past 160 years of the International Expo, the gem of international fairs, there has been a variety of exhibitions hosted by different countries.

A total of 104 countries are participating in this 93-day festival, and the three-story International Pavilion, housing the participating countries, takes up more than one-fifth of the entire expo area, which is built on 250,000 square meters (61 acres) of land adjacent to the Yeosu New Port.

The International Pavilion, 57,500 square meters in total, is three times the size of the Coex exhibition hall in Seoul and is the single biggest structure among the Yeosu Expo’s more than 30 main buildings.

Each country is vying for attention and 48 of them have their own booths. The walls within many of the pavilions function as canvases for imagery, state-of-the-art technology and multi-dimensional elements with a well-told story to express a theme.

The themes of the nation pavilions at the Yeosu Expo are related to the main theme of the expo “Living Ocean and Coast: Diversity of Resources and Sustainable Activities,” stressing the importance of environmental preservation, in particular, the value of marine resources.

“From food security to commerce, to national security and climate change, our oceans and coasts hold a key to our future,” said Clinton on video at the U.S. Pavilion, whose theme is “Diversity, Wonder and Solutions.”

“For centuries, oceans kept people apart, but today, as we look for solutions to the worlds’ greatest challenges, they are bringing people closer together,” Clinton said.

The Japan Pavilion takes advantage of the country’s strength in animation.

A seven-minute-long animation centers on a boy named Kai who, along with millions of other Japanese, experiences the massive earthquake and tsunami in eastern Japan last year.

The boy rides a magic white bicycle to ground zero. He goes above and under the sea (wings sprout on the bicycle when it flies, and it grows fins when going under water) to remind people of the destructive power of the nature when it goes wrong. The boy finally is flown to the scene where elderly residents of a Japanese town are planting trees on a mountain.

Machida Katsumi, the director of Japan Pavilion, said Japan is learning that age-old wisdom that nature is all connected and the recovery of one part requires a cure for all. “The tsunami ruined the marine life as well, but recovering the sea itself is not sufficient,” said Katsumi in an interview with the Korea JoongAng Daily Saturday.

“Nature circulates itself and that’s why people in Japan are planting trees on the mountains to prevent another crisis from happening. Japanese people had long forgotten about that and we would like to highlight the theme here in Yeosu.”

China, the host of the World Expo Shanghai 2010, also aligned itself with the Yeosu theme. The country, often criticized for lacking the will to regulate pollution in the world’s fastest growing economy, is conveying China’s commitment to sustainable ocean development through the theme “One Ocean, One Home,” according to Qian Zhang, a press officer for the China Pavilion.

European countries such as Germany, Switzerland, Sweden and Italy are also exhibiting their environment-related exhibits at their own pavilions. In the German Pavilion, people feel as if they are inside an underwater research submarine and the Switzerland Pavilion lets visitors experience the ice core, extracted from the Swiss mountains, to stress its message - the importance of water resources. Italy exhibits expensive jewelry at its pavilion. Sweden is displaying its interest in nature with the theme “an Archipelago of Ideas.”

India has decorated its pavilion in a traditional Indian style, serving its traditional food in a food section.

Other countries who don’t have their own pavilion have exhibits at three joint pavilions divided into the Pacific Ocean, Atlantic Ocean and Oceania regions.

Eating is a must at the International Pavilion and many pavilions have restaurants or snack bars where they sell traditional food. The Australia Pavilion sells kangaroo stew and beef cheese pie at 12,000 won ($10.5) and 6,000 won, respectively, both with a bottle of water. The Turkey Pavilion made its whole second floor a restaurant. A Turkish restaurant in Seoul, called Pasha, offers the same menu here, including kebabs and pide (Turkish pizza) at the same prices.

For fun-seekers, the Russia Pavilion has a simulation arcade game of navigating a sailboat. The China Pavilion has a teleconference program through which users can communicate with the members of the China’s Antarctic expedition team.