Fewer than expected visitors turn up for the Yeosu Expo, South Jeolla, yesterday. By Kim Do-hoon


YEOSU, South Jeolla - When Kim Suk decided to volunteer for the Yeosu Expo, he didn’t expect his act of good will to turn into such an inconvenience.

Kim came from Argentina last month to help out with the expo and turned his rental car in last Thursday, a day before the opening ceremony, heeding a call from the organizing committee for workers and citizens of Yeosu to refrain from using their own cars in order to ease transportation.

He believed the organizers’ promise to increase transportation in and out of the expo.

But after the opening ceremony on Friday night he waited an hour and a half to get a taxi. The next morning it took him almost as long to get back to the expo.

“I can bear with that, but if more people begin arriving here for the expo, it could be a problem,” Kim said.

The expo launched its 93-day run to much fanfare in this small southern port city on Friday night.

Yet opening day on Saturday brought in fewer than 36,000 people, much less than the initial target of more than 100,000. Even with a small turnout, a shortage of buses and taxes led some visitors to express their anger.

Some said that the lack of transportation could emerge as the most frustrating experience at the expo ? more than lodging, which initially was the biggest concern ? as the event picks up.

The number of non-commercial cars on the road dropped by 60 percent after the Yeosu city government asked the people of the city to refrain from driving. The move was considered a success given the short notice and lack of authority to enforce people to oblige. The organizing committee, instead, promised the operation of 410 free shuttle buses.

But some feel the buses aren’t enough. “We are receiving complaints from the citizens about the lack of buses they can use,” said an official in charge of the city government’s transportation policies.

Taxis are also lacking. There are about 1,396 taxis, corporate or private, registered in the city of 300,000, according to the Yeosu city government, but taxi driver Lee Gwang-seok says the number of taxis operating on a daily basis in the city is actually fewer than that due to a compulsory six-day work week. He advised the city to lift the obligation at least temporarily during the expo period. He said if it isn’t easy to change it, extending the daily operation time until 2 a.m. would help mitigate the problem.

Another taxi driver in Yeosu, who did not give his name, said allowing strangers to share taxis, illegal under the Korean law, should be considered to be allowed during the expo.

One visitor, who didn’t give his name, drove down from Seoul and was staying in Suncheon, about 30 minutes from Yeosu. He said he tried to find an “affordable” hotel in Yeosu, but the price was inflated and out of his budget. He said he didn’t have problems getting a bus from Suncheon to Yeosu.

At a press conference held at the organizing committee office next to the expo site yesterday, Vincente Gonzalez Loscertales, secretary general of the Bureau International des Expositions, the international body that oversees the expos, said that lack of transportation is a “normal problem” occurring during the early phase of any expo. He hoped it would be adjusted and solved quickly. 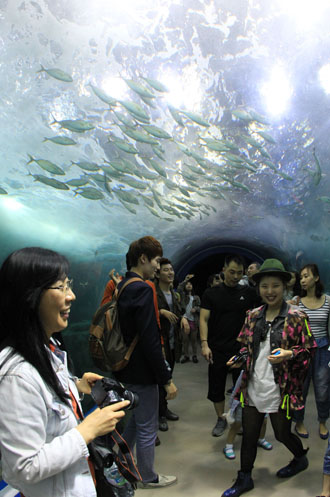 The Yeosu Expo, Korea’s second expo held after the first one in Daejeon 19 years ago, has been hoping to secure a firmer global standing of the country after its hosting of the G-20 summit in 2010 and the Nuclear Security Summit in March. The opening ceremony was received positively. Loscertales said at the press conference yesterday that the nearly 3-hour ceremony on the main Big-O stage on Friday, where President Lee Myung-bak attended with the leaders of political and business leaders at home and abroad, was received with “full satisfaction” and was “brilliant and beautiful.”

The secretary general also complimented Yeosu for “high-quality pavilions.” According to organizers and visitors, the Big-O has received the most positive assessment, along with the Expo Digital Gallery, which has a 218-meter-long (715-foot-long), 30-meter-wide LED screen that runs along the ceiling over the central corridor of the International Pavilion.

The Aquarium, which features 33,000 marine living creatures of about 280 species in tanks, which is six times the size of the 63 City Aquarium in Seoul, is also attracting many visitors.

Among the other 80 main structures built against the backdrop of a scenic ocean view of the Yeosu New Port, the Marine Robot Pavilion by Daewoo Shipbuilding & Marine Engineering and the International Pavilion also have long lines in front of them.

Futakami Atsushi, a 39-year-old Japanese man who was the first visitor at the Yeosu Expo after waiting more than four hours on Saturday, said he enjoyed the fish robot shows the most at the Robot Pavilion.

Atsushi, who has attended 12 expos, including the one in his hometown Kobe in 1981, said he and his friend Kazuhide Ota, a manager at Toyota Motor, will enjoy all the facilities at the Yeosu Expo to the fullest during their stay here until May 20.

Still, the number of visitors, 35,643 on Saturday, lagged behind what the organizing committee initially expected ? up to 300,000 a day. The committee now hopes attendance will hit at least 100,000 a day to meet its goal of creating 5.7 trillion won ($4.9 billion) worth of revenue.

The organizing committee said they aren’t worried because the tickets for the first two days were being sold at 40,000 won, 7,000 won more than regular tickets, and most of the tickets sold as packages prior to the event were ordinary tickets.

“We expect to be able to see more daily visitors as time goes on,” said Son Hyun-ki, a director of the organizing committee.

But visitors and observers say they need to do more than just wait to attract more people. The lack of lodging facilities was not a significant problem over the weekend but more support, preferably in English or other foreign languages would help foreign visitors searching for lodging.

For instance, the Media Kiosk, an automatic reservation system set up in several places at the expo site, provides the service in five languages, but special rules regarding the reservations are provided in Korean-only.