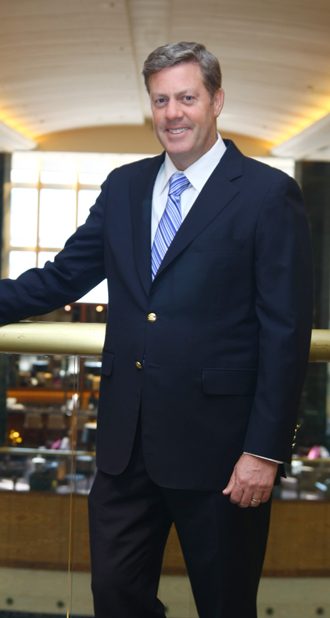 Dongdaemun, the district in northern Seoul renowned for its fashion and shopping centers, has rather unaesthetic surroundings compared to its counterparts south of the river. Vendors line up along the side of the road, construction sites are ubiquitous and heavy traffic is a daily struggle.

This is definitely not an ideal place for a five-star hotel, but JW Marriott, a luxury chain of Marriott International, is currently building its second up-scale hotel in Seoul in the tourist hot-spot, slated to open next year.

“We are excited to have the opportunity to be part of the growth and renovation of the Dongdaemun area and the new hotel will be well positioned to take advantage of business in this area of Korea,” said Craig Smith, chief operating officer of Marriott International’s Asia Pacific operations in an e-mail interview with the Korea JoongAng Daily.

Marriott chose Dongdaemun because the underdeveloped area has a high growth potential, he explained.

The JW Marriott in Dongdaemun will have 10 floors above ground and six under with a total of 170 rooms.

“The new JW Dongdaemun is strategically located in a very busy part of town and we believe that with our upscale rooms, food and beverage outlets, ballroom/meeting space, and excellent service, the hotel will be a favorite spot for people doing business in the area along with local community,” Smith said.

In a recent trip to Korea last month, he saw that there are many companies in the northern part of Seoul, but hotels are concentrated in the southern part, Smith pointed out that accommodation rates are on the rise in the Gangnam area due to this disproportion.

Marriott International plans to build 110 new hotels in the Asia Pacific region by 2015. It currently runs 140, including one in the southern part of the capital. Seoul is the second biggest market for the company in terms of revenue after Hong Kong.

As for the rising number of foreign tourists and growing need for more accommodations in Seoul, Smith showed confidence in a successful hotel business in the city.

Smith said he finds Songdo and Jeju attractive, hinting that there could be more Marriott hotels coming to Korea.

“Songdo, Incheon, Jeju and Seoul are some of the places we are exploring from a development standpoint and where we would like to operate our hotels and brands in the future,” he said.

He also gave kudos to the Korean government for its efforts to promote tourism and related industries. “Korea has done a wonderful job in developing its infrastructure throughout the entire Peninsula throughout the past 20 years. This is one of the reasons why Korea has been able to attract huge events such as the 2018 winter Olympics, Formula 1 racing and the 2012 expo in Yeosu.”

Key businesses of the Dongdaemun hotel will be restaurants and weddings, according to Marriott’s plan. As the northern Seoul area develops further, demand for such hotel services will rise, he said.