Korea’s new online petroleum spot trading market is struggling to take off due to a lack of major refineries’ participation and gas stations hemmed in by exclusive supply contracts discouraging transactions.

With top economic policy makers then billing the launch as a way to enhance transparency and competition in the local petroleum market to help bring down prices, local bourse operator Korea Exchange spent some 4 billion won ($3.5 million) to establish the market. But transactions on the market have been meager. According to KRX data, there were zero transactions in unleaded gasoline in 12 out of the past 30 days between March 30 and Monday.

In the weekly trading of the week of May 7, just 100,000 liters of unleaded gasoline were sold on the online spot market. This equals the average amount of gasoline sold in a week at some 46.5 gas stations, or just 0.03 percent of Korea’s gas stations, according to last year’s data from national trade group Korea Oil Station Association (Kosa).

Trading in diesel was comparatively lively, as some 520,000 liters exchanged hands during the same period. But the amount covers the weekly average diesel sales at just 254 gas stations - or just 0.165 percent out of total 154,148 gas stations reported by Kosa last year.

The dearth of transactions is due to lack of participation from major refineries, experts say.

Although Korea’s top four refiners SK Innovation, GS Caltex, Hyundai Oilbank and S-Oil are registered as sellers, two out of four didn’t even have a single sale on the online spot market as of May 3.

Wholesale petroleum dealerships and small importers have contributed to the existing trickle of supply, but even Samsung Total, named Korea’s fifth petroleum provider in April, has declined to join the spot market.

Major refiners remain uninterested as they still have a monopolistic hold on supplying gasoline to local gas stations. “A major hindrance [to the spot market] is that the majority of gas stations enter into exclusive contracts with a single refinery, and cannot sell several refineries’ products from a single station,” said a Kosa official. 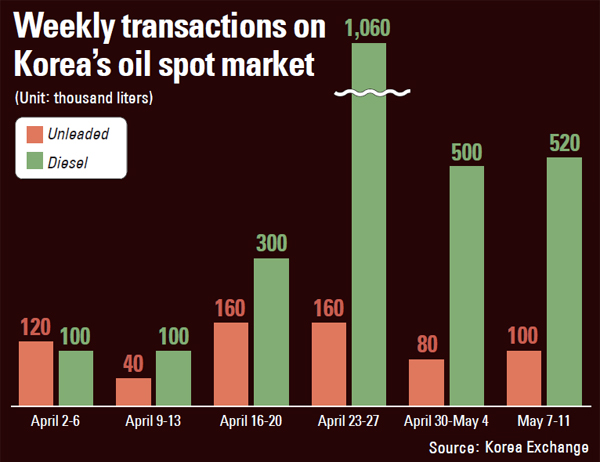 Although oil prices such as that of Dubai crude have fallen back down from highs of more than $120 per barrel earlier this year to $107.94 on Monday, risks such as global political pressure to stop Iran’s nuclear program by sanctioning oil imports could spark hikes again.

The Ministry of Knowledge Economy said on Monday that Korea asked the European Union to extend an exemption for certain insurance contracts on tankers carrying Iranian crude after July 1, when sanctions start to prohibit the coverage. If Korea cannot extend this exemption, oil imports from Iran - accounting for 9.8 percent of Korea’s oil imports last year - could come to a full stop by July.

“The government must actively support the participation of local oil importers and exporters in the market,” said Yoon Won-cheol, professor of economics and finance at Hanyang University. “One option could be to make it mandatory for local refineries to sell a certain percentage of domestic sales volume through the oil spot market.”