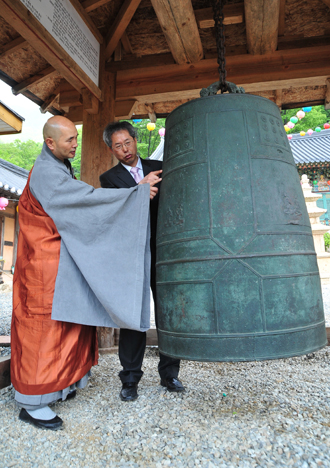 A Silla Dynasty artifact, the Yongmunsan Sangwonsa Bronze Bell - once labeled as a fake and delisted as a National Treasure of Korea - has finally been recognized as the real deal.

In 1945, upon Korean liberation from Japan’s colonial rule, the 156.5-centimeter (five-foot) tall Buddhist bronze bell, located in the Sangwon Temple in Mount Yongmun, Gyeonggi, was designated as National Treasure No. 367.

But in 1962, allegations arose that Japan took the real artifact and replaced it with a fake. Thus its designation was canceled.

The Korea Institute of Science and Technology (KIST) revealed yesterday that the bell is indeed made of copper and lead ore from Korean soil.

Do Jung-man, KIST researcher, stated yesterday that upon analysis of the components of this Buddhist temple bell with his team of researchers at KIST that the bell was cast employing Silla-era (57 BC-935) techniques.

In 1962, a scholar and former member of the Cultural Properties Committee of Korea’s Cultural Heritage Administration claimed that, “After Japan looted the temple bell, they returned an imitation in the late 19th century.” Based on this allegation, the Cultural Properties Committee determined later that year on Dec. 12 to cancel the Sangwon teample bell’s designation as a national treasure.

The KIST researchers first analyzed the isotopes in the lead, which could help determine that it originated from Korea, not China or Japan. Analysis further determined that the bell was made of ore from Mount Namhan in Gyeonggi and that the ratio of lead and copper in the bronze alloy was comparable to that of the Divine Bell of King Seongdeok (cast in 771) which is National Treasure No. 29, and other Silla-era bells.

While the exact year the bell was made is not known, Professor Do further said, “The surface of the bell, which depicts a celestial angel playing a four-string lute of the era, is an indication that the bell was cast in the Silla Dynasty.”

The Yongmunsan Sangwonsa Bronze Bell has been moved from its original location several times, disappearing from the Sangwon Temple after being taken by Japanese soldiers and later returned. It was at one point moved to Jogye Temple, the Jogye Order of Buddhism’s main temple in central Seoul, in 1939. The bell returned to its proper location at the temple on Mount Yongmun in January 2010.
By Park Bang-ju [sarahkim@joongang.co.kr]