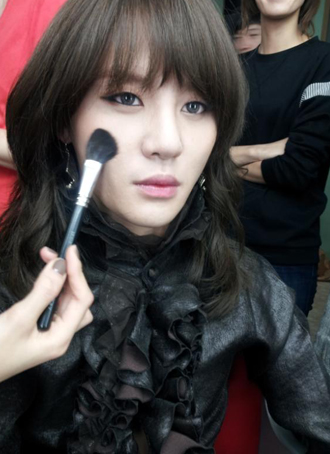 Kim Jun-su won’t be defined by gender norms, he said at a press conference to promote his new album “Xia Tarantallegra” yesterday.

The entertainer, best known for being a part of K-pop trio JYJ, said that he was tired of being perceived as “cute” by the public, and that he will completely reverse his efforts to be perceived as masculine by dressing up as a woman.

“By nature I’m quiet and reserved. Until now, I’ve tried hard to be seen as masculine to do away with the cute image,” Kim said at a hotel in Sogong-dong, central Seoul. “I know that to dress up as a girl will be controversial to say the least at first.”

A desire to break away from his JYJ group identity and pursue a career as a solo performer partially motivated his desire to cross gender lines, Kim said.

In a photo to promote his new solo album “Xia Tarantallegra,” he is pictured with ghost-white skin and nearly colorless hair.

“The concept of the new album is an androgynous wizard,” the artist explained.
By Carla Sunwoo