The Peculiar People who are saving our museums, one at a time

The Peculiar People who are saving our museums, one at a time 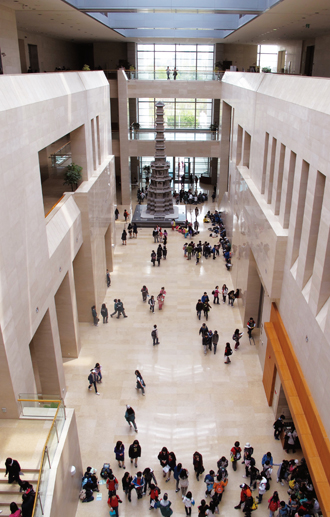 A view of the National Museum of Korea, which traces its roots to a palace museum built 103 years ago. It moved to its current site in Yongsan, central Seoul, in 2005. Provided by the museum

On a recent stormy Saturday afternoon, a group of museum aficionados pushed through the foul weather to gather at the Dungji Museum in Yongin, Gyeonggi, a two-hour drive south of Seoul.

Nestled in a remote rural town, a euphemism for the middle of nowhere, the museum showcases an array of paintings, calligraphy and antiques, including old pay-phones that used to line the streets of Seoul.

The collection is nothing like those found at the National Museum of Korea or the Leeum Samsung Museum of Art. Some may even question whether there is much distinction between the Dungji’s exhibitions and an antique shop.

But the low-budget museum has a unique history and a purpose in its town - something the group hopes to preserve and expand.

Hwang Jin-cheol, the deputy curator of the museum, cautiously explained the humble beginnings of the Dungji to his audience, now sitting in the building’s small office. His father, Ho-seok, built the museum in 1998 and has since struggled to maintain the exhibits and attract visitors.

“You could say that the items here are just placed and not really exhibited,” Hwang said. “And there were several moments when we seriously deliberated closing altogether.

“There are issues concerning finances as well as personnel. There is just me and the maintenance man who helps me out at the ticket office running this museum.”

The visitors listened intensely. To them, the Dungji Museum represents more than a son’s struggle to continue what his father built. It is rather symbolic of the struggles many smaller museums in Korea are facing, and the importance of preserving such institutions on the peninsula.

The group of aficionados are part of a recently organized community that brings together people working in various sectors under one common goal: the preservation and encouragement of museums. They call the community - which operates through its Web site and offline meetings - The Peculiar Story of Museums by Peculiar People.

The organization began with a simple idea: There are countless museums in Korea, but they could use a face-lift.

They don’t target the state-run or conglomerate-backed mega-museums, but rather plan to evaluate and assist small, privately-run institutions that are struggling to stay afloat.

At the end of 2010, there was a total of 655 museums across the country, according to the Ministry of Culture, Sports and Tourism. Some 250 of these were privately run and registered to the state.

So what’s the group’s plan of action?

Once a month, members will visit a private museum, listen to presentations by officials and take tours of the exhibits. Afterwards, they will discuss their takes on the procedures and layout and finally submit proposals of revision to museum executives.

“One shouldn’t come to these small, private museums with expectations of the museums run by the state or large conglomerates,” Bae said.

He added that these museums are caught in a vicious cycle: They have a limited budget and scarce resources, which lead to an inability to purchase new relics or conduct research and causes these museums to lose their appeal and competitiveness.

“And our campaign may not be able to change these museums overnight, but we wish to at least heighten awareness,” Bae said.

The group’s mission has coincided with other encouraging signs in the Korean museum community. Changes in government policies and the evolution in the way exhibits are accessed have all provided a boost to smaller and larger institutions. 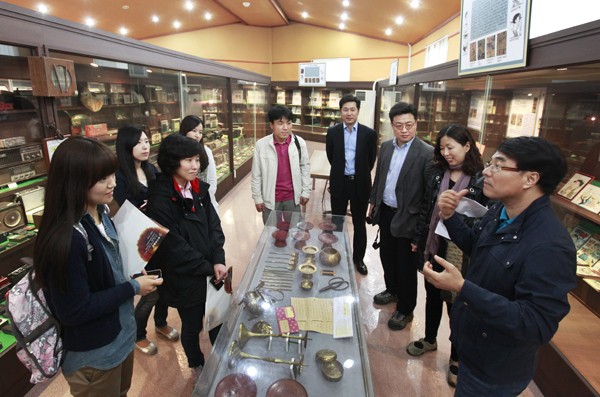 Bae Bong-kyun, far right, and other members of The Peculiar Story of Museums by Peculiar People, a community that supports smaller museums, explains to students how such institutions can be a useful educational tool.By Park Sang-moon

In 2009, Korea celebrated the centennial anniversary of its first modern museum. One-hundred years earlier, King Sunjong of the Joseon Dynasty opened a royal museum at Changgyeong Palace to showcase Korean cultural heritage to the public for the first time.

“We will transform the museum into a place for dreams and a kingdom of stories.”

Three years later, in 2012, Korean museums came across another golden opportunity to put themselves on the map of the country’s cultural and recreational scene: The adoption of a five-day school week.

With the Korean government’s announcement last year, a five-day school week has been implemented for elementary, middle and high schools nationwide since March. Students no longer go to school on Saturday; prior to the policy change, students had every other Saturday off.

And one more day off is another day for visiting museums. Observers are saying that Korean museums are quite ready to embrace those parents and children looking for some fun and educational experiences on the weekends.

According to the Ministry of Culture, Sports and Tourism last month, the average attendance per museum or gallery last year was around 60,000, which is above the OECD average of around 50,000.

Museums also excelled in the number of special programs held last year, and visitors responded approvingly. Some 71.3 special programs were held in 2011 and they greeted 1.3 million visitors. These numbers outpaced those in the performing arts.

But the increase in the quantity of visitors has not led to a simultaneous improvement in quality, the ministry said.

“Regional governments in particular have only focused on building new cultural facilities without investing in management and content,” said Kim Jae-kyeong of the ministry.

“There’s been a notable expansion of cultural facilities, but there needs to be more investment in ensuring stable management and quality content.”

Technological advancements may be what preserve relics of the past. The incorporation of cutting edge technology like 3-D displays and robots are luring visitors of all ages.

NHN, which operates Naver, Korea’s largest web portal, and the National Museum of Korea announced on May 8 their plans to operate the so-called “Naver Museum” (http://museum.naver.com) where people can enjoy ancient relics in the comfort of their own homes.

With the click of a mouse, one can browse through and learn about the country’s national treasures, with audio guides provided in both Korean and English.

“We will be able to promote our cultural heritage even for those who cannot make it to the museum in person,” NHN said in a press release.

These services could also provide much-needed publicity for smaller privately run museums that are trying to expand their customer bases.

NHN has had experience in this field, as it has worked with a number of art galleries so that people can enjoy the collection of some 151 art museums in 40 countries.

The Leeum, Samsung Museum of Art in Yongsan, central Seoul, and the Ho-Am Art Museum in Yongin, Gyeonggi, are also good examples of institutions bringing museums to life.

Whether museums adapt to changing times through technological advancements or the advice of the Peculiar People, Bae of Shinsegae said what’s important is that society pays attention to their preservation.

“Museums are a yardstick of a country’s cultural standards,” he said.