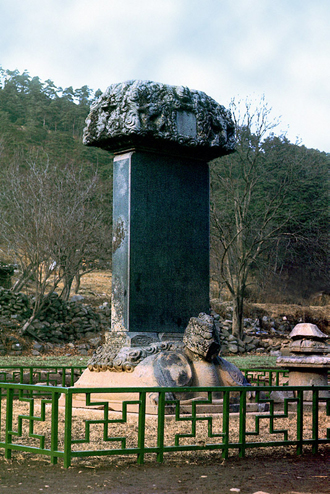 
Boryeong Seongjusaji Nanghyehwasangtapbi, located at the Seongju Temple site in Boryeong, South Chungcheong, is a monument created in memory of Nanghyehwasang, a Buddhist priest. It is considered one of the most important monuments of the Unified Silla Dynasty (668-935).

Nanghyehwasang, who was the eighth descendant of King Muyeol, was born in 801 in the second year of King Aejang’s reign and became a Buddhist monk at the age of 13. In 821 during King Heondeok’s reign, he visited the Tang Dynasty to study and achieved spiritual enlightenment through discipline. In 845, he became the head monk of Ohapsa Temple, later renamed Seongju Temple.

* The photos and text for National Treasure are provided by the Cultural Heritage Administration. For more information, call (042) 481-4650 or visit www.cha.go.kr.