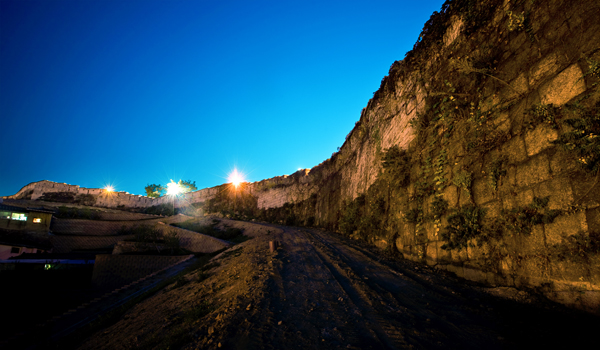 
From Gwanghwamun Square to Seoul Station and the new City Hall, the city has been home to many restoration and development projects in recent years at a number not seen since the Park Chung Hee administration.

In the 1970s, the dictator restored historic structures by arguing that they were related to the important issue of national defense.
But in the ensuing decades that brought regime changes and tumultuous democratization movements, preservation efforts simply weren't a priority for the government or everyday people. 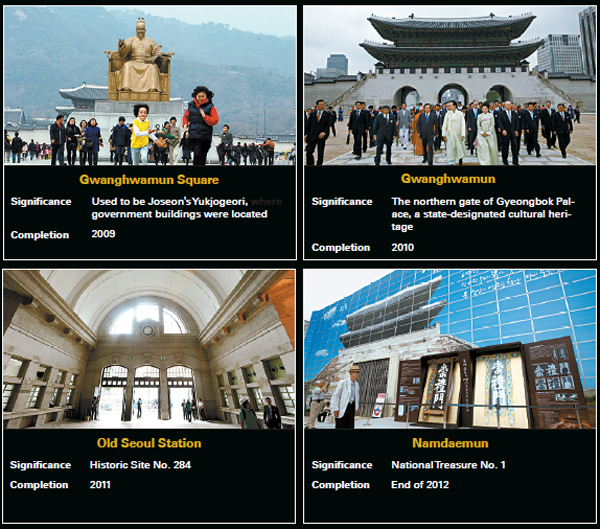 Its efforts are buoyed by increased awareness of cultural properties and the recent Unesco recognition of several Korean heritage sites, including the royal tomb in 2009, as well as by the return of stolen relics, like the case of the Uigwe royal protocol books last year.

Early this month, the government announced that it will continue such initiatives by restoring the Seoul wall by 2015.

“Korea is the only existing castle city in the world,” Mayor Park Won-soon said. “With the restoration, the Seoul wall will be a place of pride and an attraction for foreign tourists.”

A wall of tradition

According to historical records, there was a tradition during the Joseon Dynasty (1392-1910) called sunseong, which literally means circling the fortress. Records say people of Hanyang (now Seoul) walked along the wall in pairs and that walking its entire length took one day.

The tradition carried on during the Japanese colonial period (1910-1945), but was slightly twisted. A news article from May 14, 1916, said that the merchants of Jongno walked around the fortress believing that this would bring them luck in their businesses.

The wall was first envisioned by King Taejo, the first king of Joseon, when he announced that Hanyang would be the new capital of his territory. First, he ordered the construction of Jongmyo, a shrine for ancestors, and Gyeongbok Palace, a home for himself. To complete his vision, he initiated the building of a protective city wall.

It took 197,470 people drafted from across the country only 49 days to complete the wall in 1396. It was 18 kilometers (11 miles) long and seven meters (23 feet) high.
The location once again gained the attention of the government during the Park Chung Hee era, the officials of which worked to restore it after many years of neglect. Today, about 12 kilometers remain scattered around the city.

Now, it's going to be worked on again.

By 2015, Korea not only hopes to complete the restoration but also register the fortress as a Unesco cultural property.
For areas that are difficult to restore due to roads or other impeding structures, the city government will construct overpasses, leave special identifying marks or develop other creative alternatives.

“Seoul's city wall is very unique,” said Ahn Chang-mo, an architecture professor at Kyonggi University. “Most fortress cities in other parts of the world are built on level ground. But Seoul's city wall was strategically built along the ridges of mountains, making the land contained inside the wall higher than that outside of its boundaries.”

But the return of old Seoul is not without problems. Take, for instance, the heated debate about calligraphy on a signboard hanging on Gwanghwamun.

Gwanghwamun was restored on Aug. 15, 2010, to correct a distortion put in place during the Japanese colonial era. Originally, a hanging signboard was inscribed with Chinese characters as based on an ancient photograph.

The Chinese calligraphy in the photo is thought to be the work of a Joseon commander named Im Tae-young, who was in charge of restoring Gyeongbok Palace after it burned down during the Imjin War between Korea and Japan.

But just three months after the 2010 restoration, a crack was detected on the signboard. The Cultural Heritage Administration made a repair but is now also in the process of making a new one.

Some scholars have taken this opportunity to argue that instead of Chinese, the new signboard should contain Hangul calligraphy, as was the case in 1968 when Park Chung Hee restored the area that was altered during Japanese rule. They say that using Korean words would better embody the Korean spirit the location is meant to represent.

Further complicating the issue, others suggest putting Chinese and Korean together.

There is also a major problem with the restoration of Namdaemun: the budget.

Korea plans to construct a hall to commemorate the original gate, which burned down in 2008, next to the restored Namdaemun. However, while the Cultural Heritage Administration wants the Seoul city government to cover 70 percent of the costs, the Seoul Metropolitan Government wants to split costs with the national government 50-50.

All parties involved view cultural restoration as important, but as with many government initiatives, there are sticking points, especially when it comes to logistics.