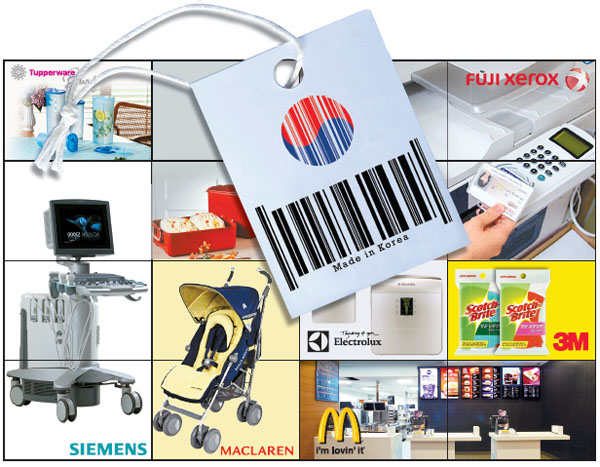 More multinationals are using Korea as a test-bed for new products before offering them internationally.

Analysts say Koreans are reliably picky about products and Korea is a good market to tell if products will succeed elsewhere.

Executives of multinationals such as McDonald’s, Fuji Xerox, Siemens, 3M, Tupperware, and Electrolux say Korea is one of their favorite test markets. And they can also take advantage of Korea’s technological prowess to come up with new products and technologies that hadn’t been thought of elsewhere.

The Korean office of Siemens Ultrasound is a case in point.

The company has been exporting the latest ultrasound devices, including the Acuson and Transducer, to Asia, the United States and Europe from 2008 from its R&D centers and factories. Currently, 60 percent of worldwide production of its ultrasound devices is in Korea.

Park Su-man, vice president of Siemens Ultrasound Systems Korea, said it wasn’t an easy start. Korea was regarded as a tough market because its demand for ultrasound devices was small.

“When we insisted our U.S. headquarters establish a Korean business unit, they weren’t interested,” he said. “But after showing them the results of our own R&D centers, they liked what they saw. We opened an innovation center in Gyeonggi in April 2009 where researchers can test the next-generation ultrasound technology. This was a feat given that it was the second one to be established after the United States and it’s the only center in Asia.”

Fuji Xerox Korea has been exporting its ApeosWare Image Log system to six countries including Singapore and Hong Kong since 2011 after it developed the system in 2006. The Image Log system keeps electronic records of anything copied, scanned or printed to prevent leaks of a company’s sensitive information to industrial spies.

Documents that are saved as “confidential” or “customer information” can’t be printed out without authorization of executives. When a third party attempts to print out, executives receive e-mail alerts.

“Korea has the highest demand for security solutions on copying machines than any other country in the Asia-Pacific region,” said Yasuaki Ueno, CEO of Fuji Xerox Korea. “We estimate this technology will be exported to other markets as people get more concerned about document security.”

Tupperware Korea, the local operation of the world’s No. 1 plastic kitchenware maker, developed containers to hold kimchi, targeting Korean consumers. Last year, 7,000 sets of kimchi containers were shipped to Indonesia and Philippines, where they are used to keep homemade fruit juices fresh.

3M Korea has been exporting a Scotch-Brite sponge to overseas markets since 2001 after it was developed based on an idea by a Korean homemaker, So Jeong-hwa, who wanted a more effective sponge in her kitchen. One side of the sponge is made of absorbent cellulose to wipe up spills. The other side has a scouring surface.

Maclaren, a British baby stroller maker, offered a new stroller in March made with stain-resistant Nano-Tex fabric for Korean moms, who like stain-resistant products. It plans to launch the product worldwide next year.

It’s scheduled to sell the Friska in Asia, Europe and the U.S. after getting feedback from Korean consumers.

“Chinese like discounts, Japanese choose substance over appearance, Americans emphasize utility and Europeans pick products based on durability,” said Jung Hyun-joo, CEO of Electrolux Korea. “But Korea is the toughest market in the world because Koreans only buy products that satisfy all four of those standards. This means that products Koreans like will be favored by others, too.”

McDonald’s Korea developed a new type of beverage dispenser for its outlets and exported the know-how to McDonald’s headquarters. McDonald’s will introduce the system in newly opened outlets in Asia Pacific, Middle East and Africa.

In February 2011, a group of executives from the headquarters visited an outlet in Daegu to see the new beverage dispenser. Don Thompson, who will take over in July as McDonald’s new global CEO, was in the group.

The kitchen crews often get log-jammed at the beverage dispensers. In November 2010, McDonald’s Korea created a single drink tower inside the kitchen that rotates depending on which crew needs it more. It allows crews to take fewer steps in assembling orders. The company said 16 minutes can be saved when dealing with 100 customers.

“The system reduced our customers’ waiting time, by an average of ten seconds during busy hours,” said Sean Newton, managing director of McDonald’s Korea. “Just a few years ago, Korea adopted systems developed in other countries. It’s remarkable that Korea has transformed into a setter of global standards.”