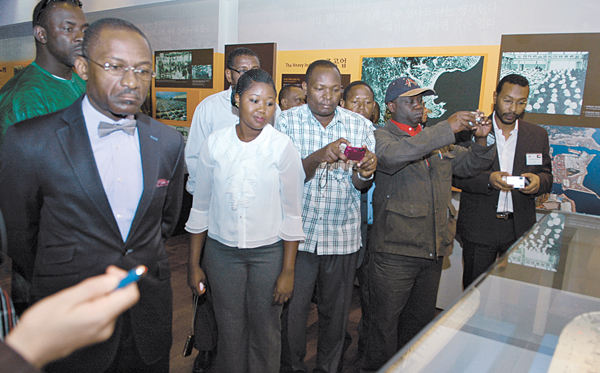 Fifteen high-level and junior officials from seven African countries visit Hyundai Heavy Industries in Ulsan on May 8 as a part of a two-week long government official training program, organized by the Korea International Cooperation Agency and the Central Officials Training Institute. Provided by COTI

The program, designed to train government officials in public administration, good governance and market economy was organized by the Korea International Cooperation Agency and COTI, under the auspices of the Ministry of Public Administration and Security. It was held May 1-11.

On the last day of the program, the officials drafted and presented action plans that they would bring home to their respective governments.

The Korea JoongAng Daily spoke on the last day of the program, on May 10, with a Cameroon career diplomat, Ambassador Guillame Nseke, 52, who is currently technical advisor to the Minister of External Relations. His 20-year-long career included serving as Permanent Represent of OIF (International Organization of La Francophonie) to the African Union and Inspector General at the Ministry of External Relations.

“When we visited Posco, I was very sad,” he said, because Cameroon has all the abundant natural resources but did not take the opportunity to cultivate them.

“Posco I am very interested in because right now your country is in a deal with my country concerning iron ore.”

He also expressed his country’s progress in bilateral talks between the two countries regarding shipbuilding, and Korea’s interest in investing in the country.

In his visit to Korea, he was also checking out the industrial aspects and said, “We were a little reluctant because we didn’t know what Korea was doing. When I go home, one of my objectives will be to make my government realize that there is great possibility in Korea.”

“Korea in the late 1980s came to Cameroon to open an embassy, and as it happened I was there.” He stated that the gift from Korea to the embassy was computers at that time, but Cameroon had to shut down the embassy in 1988 due to economic issues. Since then Korea has reopened an honorary consulate there.

“Koreans have been our friends for a very long time. In diplomacy, you have reciprocity. And very soon, Cameroon will be represented in Korea at the ambassadorial level.” Nseke stated in his country’s action plan that Cameroon plans to open an embassy in Korea in the near future, a plan already approved by the Cameroonian president, and hopes to try to open up business opportunities with the country as well.

“There is a lot of discipline in the country,” he said, expressing that he was impressed with the road situation and the CCTVs installed everywhere for public safety.

“Most African countries need to think of capacity building before thinking of reaching your level, or why not, becoming bigger than Korea,” he said with laughter.

Nseke, who has traveled far and wide in his long career, is no stranger to Korean cuisine. His children practice Taekwondo and he is especially fond of ginseng. But he admits that the Cameroon public’s awareness of Korea may be thus far limited to brand recognition of big corporations like Hyundai, Samsung or Daewoo.

Obianuju Catherine Nnabuenyi from Nigeria, the youngest of the delegation at 26 and a legislative assistant in the National Assembly, admits she is new to Korean culture.

An environmentalist, she was especially impressed with her visit to the Gangnam Resources Reuse and Recycling Center. When she goes back to Nigeria she wishes to propose such a bin disposal system there for recycling.