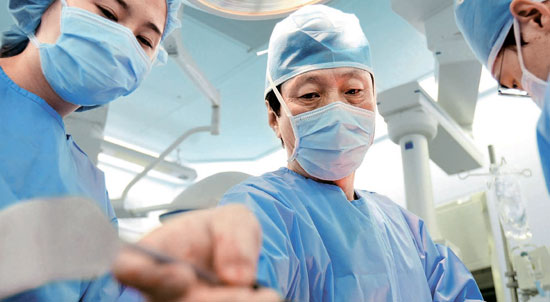 Large hospitals in Korea, including the Yonsei Severance Hospital in Sinchon, northern Seoul, and the Soonchunhyang University Hospital in Bucheon, Gyeonggi, were found to have the nation’s highest mortality rates for surgical treatments of cancer, according to the Health Insurance Review & Assessment Service (HIRA) yesterday.

The HIRA is under the Ministry of Health and Welfare. Operative mortality rates refer to the rate of death occurring within 30 days after surgery.

Based on the government’s study of 302 hospitals nationwide of their stomach, bowel and liver cancer surgery results in 2010, higher rates of post-surgery death were found at the 33 largest hospitals.

Among the 33 hospitals, 13, including Inje University Paik Hospital in Haeundae, Busan, and the Uijeongbu St. Mary’s Hospital in Gyeonggi, had higher surgical death rates for liver cancer operations.

For example, at the Yonsei Severance Hospital in Sinchon, the operative mortality rate was 1.09 percent for cancer patients. In other words, of the 1,105 patients who received stomach cancer operations, 12 died within one month’s time.

The HIRA also disclosed a list of hospitals with lower surgical mortality rates for cancer.

In response to the government report yesterday, the pinpointed hospitals strongly refuted it.

“There were cancer patients who received surgery at a different hospital but came to our hospital as a last resort,” said Lee Jin-woo, an official from the Severance Hospital in Sinchon.

Bae Seon-hee, an official from the HIRA, said, “Cancer is the No. 1 cause of death in Korea and treatment results differ by medical institution.”
“We decided to study the overall status of cancer treatments in Korea and disclose the results based on growing social demand for surgical mortality rates,” she said.

The HIRA will release its second round of analysis into the mortality rates in 2013 after studying surgical results for 2012.

It is also considering studying the results of more types of cancer, such as breast cancer and lung cancer.