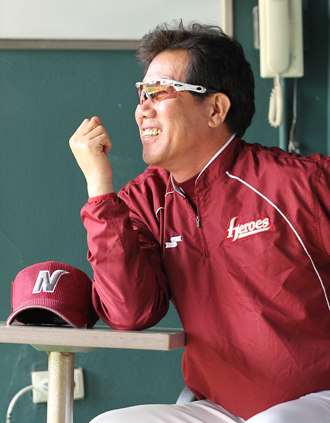 Nexen Heroes manager Kim Si-jin smiles before the KBO game against the LG Twins at Jamsil Stadium in Seoul on Tuesday. By Lim Hyun-dong

The Nexen Heroes, last year’s bottom-cellar club in the Korea Baseball Organization, have surprised baseball fans with a dominant start to the season.

The Seoul-based ball club was the hottest team last week. From May 15 to 20, it swept three-game series against the Lotte Giants and defending champion Samsung Lions to climb to second place in the league standings.

There are still many games left in the season, but the Heroes have already set a milestone of their own. The team marked its longest winning streak since management changed in 2008 with seven consecutive wins after beating the LG Twins 2-1 on Tuesday. The previous record was six games, which was set in 2009. At this pace, the team is on track to have their best season since they moved to Seoul from Incheon.

For the unexpected heroic start, many praise manager Kim Si-jin, although he says that the players and coaching staff have all done well to create this phenomenon.

Kim, who became a legendary KBO pitcher after amassing 124 wins and 73 losses with a 3.12 ERA in 10 seasons during the 1980s with the Giants and Lions, spent the past three seasons in distress after taking the coaching job in 2009.

The Heroes’ performance went downhill under Kim’s reign, finishing sixth in 2009 and seventh in 2010. Not only was their performance a problem, but the Heroes had financial troubles that forced it to sell many of its core players to other clubs. Last year, the ball club finally hit bottom.

But Kim didn’t give up despite the slump. He tried to find new faces and keep the lineup intact. At last, the club management supported his efforts by signing top-class hitter Lee Taek-geun and former Major League Baseball All-Star pitcher Kim Byung-hyun.

The former assistant coach for the Taepyeongyang Dolphins and Hyundai Unicorns emphasizes to his players that they should not to be scared of failure. The 54-year-old asks pitchers to give up singles rather than walks, while for batters, the manager pushes them to move ahead on bases with aggressive running.

In an interview with the JoongAng Ilbo on Tuesday, Kim said that he posts the phrase “Dreams come true” inside his room. His dream was simple: to be acknowledged by others that he can make results as a decent coach. So far, it seems the manager is on track to realize that dream.

Q. How do you see your team’s superb performance these days?

A. Honestly, I don’t know how my team will perform. I think since we started to win once or twice, we gained confidence that we can actually do it. There’s something like an invisible power. The point is that we started to collect runs late in the game.

How’s the atmosphere among players? Do they get lost like in the past?

I don’t think there are players who still have thoughts like that. I don’t know when they will be, but difficult times will come. However, if we can perform like we have, I think the team can quickly recover. Not having a losing streak is more important than having winning streaks.

What has changed compared to last season?

Actually, nothing much has changed. When we signed Lee Taek-geun and Kim Byung-hyun, I said we would benefit if the other players also improved their performance. Since batters like Jung Soo-sung, Chang Ki-young, Park Byung-ho and Kang Jung-ho are doing well, overall performance has leveled up.

To this day, the Heroes’ image has been the club that sells its players to other clubs. But still, many competitive players are coming out. What’s the reason?

Sometimes I have thoughts like this. If there are many players in the same position, there will be competition, but we can’t forever wait for one player to shine. If a player doesn’t do well, some might leave him out, but if that happens, players lose confidence and thus play poorly. What we do is we trust players and keep sending them. They grow naturally.

Baseball fans refer to the game versus the LG Twins as “El Nexlasico” (taken from the Real Madrid-FC Barcelona football match, “El Clasico”). What do you think of this?

We are the youngest ball club in Seoul. Compared to the Doosan Bears or LG Twins, we have a small fan base. My wish is to see packed crowds at Mokdong Stadium during the weekdays. I know our superior record against the Twins will not last forever, but honestly, I really want to beat them when we meet each other.

Do you think the Heroes have now transformed into a club that can compete for the title?

President Lee Jang-seok and I eat together a number of times each year. When I extended my contract last year, Lee and I said that we should bet everything in 2013. This year will be the year to present a stepping stone. We can’t win the title right after hitting bottom. We need to prepare a spring board so that we can see the goal and fight.

How far can the Heroes reach this season?

If I knew that answer, I would change my job to fortune telling. The season has just digested only a quarter. We can’t predict how long this pace will last.