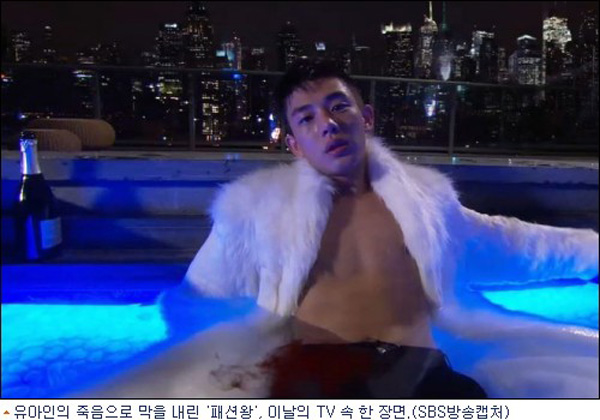 On the morning of May 23, netizens and loyal followers of the SBS drama “Fashion King,” which came to an end on May 22, took to the net to vent their furor over the show’s cliff-hanger ending.

On its final episode, main character Young-geol (played by actor Yoo Ah-in) was shot by an unidentified assassin. The identity of the killer remained a mystery up until the end, leaving the viewers scratching their heads and stretching their imaginations.

The three main suspects are as follows:
Jung Jae-hyuk, who was Young-geol’s competitor in both fashion and love and lost to him at both.
Lee Ga-young, Young-geol’s love interest who felt betrayed by Young-geol’s choice to leave her and pursue his career in the United States.
Madame Jo, who had to shut down her clothing store due to Young-geol.

Netizens are still discussing who the killer might be and many are unsettled by the shocking ending.
The final episode garnered 9.6 percent of viewers’ ratings while competing shows “Love Rain” reached only 5 percent and “Light and Shadow” had the lead by amassing a 21.5 percent rating.