Payment for the diesel power plant in Iraq built by STX Heavy Industries, pictured above, is expected to ease the group’s financial difficulties. Provided by the company


STX Group’s financial woes are easing due to developments in the Middle East that are set to make it more liquid.

The group said yesterday it anticipates receiving over 700 billion won ($601.4 million) in revenue from Iraq to build a diesel power plant that will be completed next month.

“We are getting the payment earlier than expected,” a STX spokesman said.

The group expects to be paid 448.7 billion won early this week through Standard Chartered Bank. An additional 300 billion won will be wired early next month, it added.

In May 2011, STX Heavy Industries signed a deal to build the 2,500 megawatt plant with the Iraqi government. This is part of a 1 trillion won project being undertaken by the conglomerate in the strife-laden country. It received an advance payment of 170 billion won last year.

STX Group has been suffering from a severe liquidity crunch as the global economic slump hit its main businesses, including shipping and shipbuilding. Sharp declines in demand for cargo shipments and ship orders sent shock waves through the group. 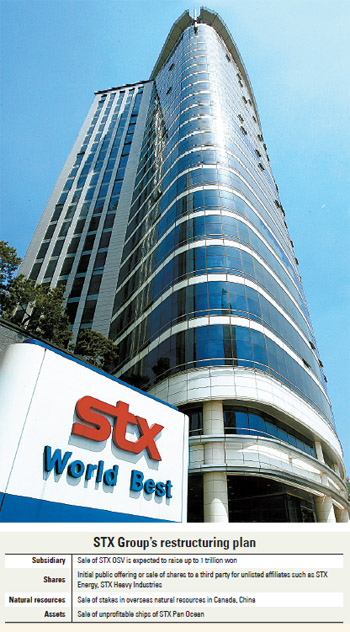 In 2007, it started building a shipyard in Dalian, China, by raising 1 trillion won from within the group and another 1.5 trillion won from external sources. However, the industry took a turn for the worse after the shipyard was completed in 2009.

Until now, STX has moved to expand its operations through a series of M&As. Its debt ratio is close to 200 percent.

STX has mapped out a restructuring plan with its main creditor Korea Development Bank. The plan includes the sale of STX OSV, a European subsidiary that makes offshore vessels, as well as shares in its unlisted affiliates.

STX Group is going to select a priority negotiator soon. According to recent reports, the consortium of Italy’s state-run shipbuilder Fincantieri and U.S. private equity fund Carlyle is a likely candidate to buy STX OSV. The group said the negotiations are in their financial stage.

The group got hold of the subsidiary in 2007 by acquiring STX Europe. STX OSV has nine shipyards in Norway, Vietnam, Romania and Brazil, which together earned 436.3 billion won on sales of 2.5 trillion won last year.

According to industry sources, if the group can fetch 700 billion to 800 billion won from the sale of its 50.75 percent stake in STX OSV, it could have 600 billion won at its disposal once operating capital has been factored in. It is due to repay 380 billion won of debt this year and 1.3 trillion won in 2013.

STX Group is now trying to create a company with Korea Development Bank and also sell stakes in its unlisted affiliates such as STX Energy and STX Heavy Industries to a special purpose - or shell - company, which would then sell the assets onto third parties. 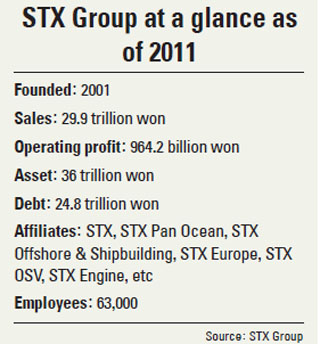 Recently, there has been talk of the group facing a liquidity crisis. On May 17, STX’s share price plunged 11.4 percent while STX Pan Ocean sank by the daily limit of 15 percent. STX Offshore and Shipbuilding, STX Engine and STX Metal also fell by double digits.

Some industry observers see this as a positive sign for STX.

“The group’s liquidity problems will be resolved to a large extent,” said Jeon Jae-cheon, an analyst at Daishin Securities. “If STX succeeds in selling STX OSV, it won’t have liquidity problems anymore this year,” Jeon said, adding the recent talk of a liquidity crisis was ungrounded.

However, another analyst said the group has far to go to get back on its feet.

“It needs 2 trillion won to complete the restructuring, so a few hundred billion won will not be of great help,” said the analyst, who declined to be named. “STX Heavy Industries has taken the money this time, but the real problem lies with STX Offshore and Shipbuilding, which has a large debt but few orders.”

With the news over early payments from Iraq, the share prices of the group’s affiliates advanced on Tuesday but lost the gains yesterday.