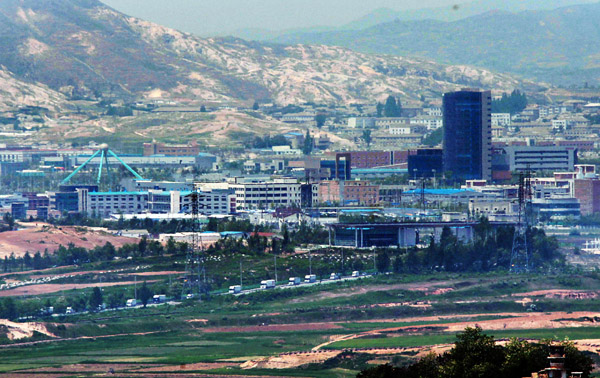 
Exactly two years ago, on May 24, 2010, in the aftermath of the deadly sinking of the Cheonan warship, the Lee Myung-bak administration imposed sanctions against North Korea that forbade all inter-Korean trade and South Korean investments in the North.

Since the sanctions, the North Korean economy has heavily depended on its closest ally China, even though South Korea still operates one form of trade with the North.

Statistics from the Korea International Trade Association show that the volume of inter-Korea trade in 2011 dropped by 10.4 percent, falling to about $1.7 billion from $1.9 billion in 2010. The Kaesong Industrial Complex, which was exempted from the sanctions, accounted for most of the inter-Korean trade.

The economic interaction between North Korea and China is growing significantly.

For instance, the Chinese government is carrying out a project to dredge the Tumen River, which is located near Musan, for iron ore deposits.

“A Chinese firm based in Yanji is now implementing a 60-kilometer-long (37-mile) dredging project in the Tumen river bed,” a government-affiliated research official said.

“It’s not simple dredging work, but a plan to mine the iron ore buried nearby.”

“In the river bed, about 30 percent of the sand contains iron ore,” the official said.

The regime also exports their labor forces to their closest ally.

“Most of the local people left for South Korea to get a decent job and the average wage for a Chinese worker is increasing,” a Chinese factory manager in Yanji said. “So we are planning to hire North Korean workers instead.”

Pyongyang and Beijing are also focusing on developing the two special economic zones, Rason and Hwanggumpyong in northeastern North Korea.

When Chen Deming, the Minister of the Chinese Ministry of Commerce of China, and South Korean Trade Minister Park Tae-ho had a bilateral meeting on May 2 to start negotiations on the Korea-China free trade deal, they included a provision stating the two countries will allow preferential tariffs on goods produced in designated zones.

“Hwanggumpyong is like a Kaesong Industrial Complex to China,” a South Korean authority said. “The Hwanggumpyong zone has the same function as Kaesong, composed of China’s capital and technology and North Korea’s land and labor forces.”

In the Rason Economic Zone, China has finished construction paving the 53-kilometer-long road connecting the Rason zone and a local tax office in Wonjong-ri, a North Korean village close to China.

The Chinese government also arranged a harbor near the Rason area, constructing a pier that can accept a three million-ton ship and building a bus route between an express bus terminal in China and the zone.

“If China uses the Rason harbor, they can save $10 per metric ton,” Jo Bong-hyeon, a senior official at the Industrial Bank of Korea, said. “It’s really good business for China, enough to invest money on building infrastructure in the zone.”

Despite the growing trade between China and North Korea, the Kaesong Industrial Complex is still operating.

“In the case of shutting down the complex, we had calculated the amount of compensation for the South Korean companies there,” a South Korean government official said.

“However, we determined not to suspend the complex to provide opportunities for North Korean people to experience a market economy and give hope that the inter-Korean relationship will improve in the future.”

Located only three kilometers away from the Military Demarcation Line, the inter-Korean complex has 123 South Korean companies and about 51,000 North Korean employees.

Although it has been eight years since the first South Korean firm moved into the complex in December 2004, no one has proposed demolishing the complex, despite a slew of military confrontations between the two Koreas.

The Kaesong complex has been growing annually, with about 10,000 workers sent from the North.

Currently, the South Korean government is implementing a scheme to build more roads and infrastructure for South Koreans crossing the border to commute to the complex.

“Although Kim Yong-chol, former head of the policy planning office of the North’s powerful National Defense Commission, who has exerted a huge influence on operating the Kaesong complex, repeatedly threatened to shut down the complex since the May 24 sanctions, he’s recently been more cooperative, saying ‘Let’s make it better,’” a high-ranking government source told the JoongAng Ilbo.

Unlike the frosty inter-Korean relations, the sales performance of the joint industrial complex is positive. For the past three years, 55 South Korean firms additionally moved into the complex and the annual output value surpassed $400 million in 2011, jumping from $180 million in 2007.

“When I first came here, I interviewed North Korean female workers and they looked so poor and aggressive that I deeply regretted moving here,” a chairman of a private firm in the complex said.

“However, in just a few years, everything has remarkably changed near the complex.”

In August 2011, Al Bazar’s Lino Ieluzzi, a noted fashion figure in Italy, made his visit to a clothing factory of South Korean fashion company Shinwon Group in the Kaesong Industrial Complex. Observing the North Korean workers at the conveyer belts, he reportedly said, “This quality [of the clothing and the conditions of the factory] is better than that of factories of Italian suit brand Brioni.”

Park Seong-cheol, 72-year-old chairman of the Shinwon Group, told the JoongAng Ilbo that one of the contributors to his success in the complex is his kind attitude toward North Korean workers.

He said that every day he welcomed a total of 1,720 North Korean employees working for his factory an hour before they started work and recorded their daily performance every day for the past 3,000 days.

“In the beginning, they thought I was just acting [to be kind],” Park said. “Now, they urge me to join their break time.”

Currently, roughly 160,000 people are living in Kaesong city and approximately one out of three are working in the complex.

However, the complex has also been affected by the May 24 sanctions. As talks between the two authorities have been halted, North Korea has unilaterally decided to raise taxes on income and management of the complex.

Analysts calculate that the regime is holding at least $50 million from the $77.8 million of the North Korean employees’ annual income.

Yu Woo-ik, Minister of Unification of South Korea, said that although the May 24 sanctions will continue, improving the inter-Korean relationship is still possible.