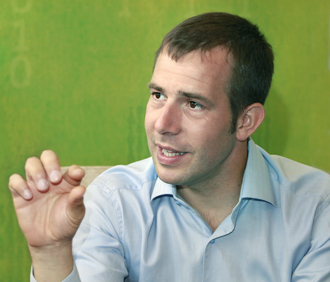 Amid intense interest about the initial public offering last Friday of Facebook and the ongoing blame game concerning its falling stock prices, Javier Olivan, the company’s Head of Growth, kept his lips zipped during an interview in Seoul on Wednesday.

“I can’t answer that,” he said when asked how Facebook insiders are reacting to the historically large IPO and the aftershocks.

The head of communications from headquarters, a growth manager based in Korea and a few other PR officials sat beside him with pained smiles.

As a high-ranking manager at the Menlo Park, California-based company responsible for “breaking the technical, design and language barriers so more people could have an access to today’s most popular social networking platform,” in his words, Olivan said the financial side was not for him to talk about as he sat down with the Korea JoongAng Daily for an interview.

Olivan was on his third or fourth - he was confused himself - visit to Seoul since he joined the then-obscure company in 2007 after finishing business school at Stanford University. During his 48-hour stay, he was to give a speech at a forum in Seoul and have business discussions with the Facebook staff in Seoul, which are comprised of one “growth manager” and two technicians. Facebook has a rule not to have any regional office with a regional head, he said, and it doesn’t plan to change it.

Its Korea engineers, who work at the Asem Tower in Samseong-dong, southern Seoul, are dispatched to Korean companies that work with Facebook to help with technical issues.

The Spanish-born Olivan, who is two years older than his boss Mark Zuckerberg, expressed his excitement about the social networks and technological innovations here in Korea.

If any Korean startup offers a killer technology, Facebook is willing to buy it, adding it to the dozens of fledgling enterprises Zuckerberg has been snapping up in the past seven years, and with particular concentration since 2010. 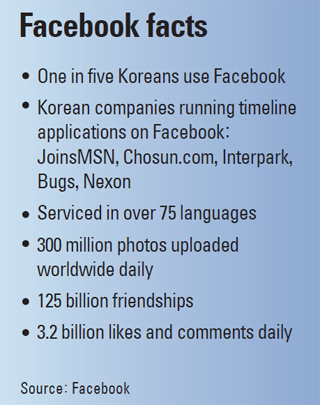 “We need to continue attracting great entrepreneurs who are creating great innovation,” he said, “If you look at the past acquisitions, they were more about talent and individuals behind the companies rather than services themselves, with a few exceptions. So yes, absolutely hopefully we’d love to see great entrepreneurs from Korea developing great services.”

Acquisitions by Facebook include Instagram, purchased in April for $1 billion, one of its most attention-grabbing deals; DayTum, a two-man data collection and organization startup; information graphics and layout producers such as Snaptu, Sofa, Push Pop Press and Strobe; Lightbox, a photo-sharing application developer; and Karma, a social-gifting startup, both bought this month.

It might not be long before we see a Korean enterprise become the next Asian startup to join the list, following the Malaysian startup Octazen, the first and last so far, acquired in 2010.

“When I first came here, there were very few users of Facebook but now one out of five Koreans actively use it,” he said. “Active” is defined by at least one login per month. Based on what he said, some 10 million Koreans have not only registered themselves with the social network but also visit regularly.

“User base has been growing very rapidly and we are working with a lot of Korean companies,” Olivan said. “I’m especially excited about what new services we see coming out of Korea that embrace social design and Web.” 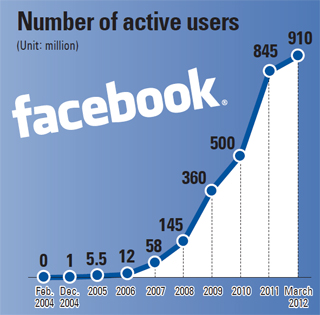 As examples of Korean firms working with Facebook recently, he mentioned Bugs music streaming site, run by Neowiz Internet, Joins MSN, a media network of JoongAng Media Network, Interpark online commerce provider and some other Korean business partners that link their sites with Facebook to enable users to share what they are listening to, reading or desiring to purchase. But “that’s just tip of an iceberg,” he said, “and there’s going to be a lot of more innovations coming out of Korea.”

In a bid to cater to an ever-increasing international demographic, the U.S. company has been trying to find localized functionalities unique to the local culture. Making it possible for users to specify their blood type in their profiles is one feature that exists only in Korea and Japan, Olivan said, where many people have the belief that one’s temperament is dictated by blood type. Enabling users to search others by names in both their English spellings and their own alphabet is only available in countries using languages with double-byte character sets such as Korean, Japanese and Chinese.

Facebook’s corporate flexibility was also demonstrated when Olivan was told during the interview that many users are unhappy about not being able to get out of the Timeline service, a new version of profiles that was fully implemented early this year, once they have switched to it. Zuckerberg called the feature, “All your stories, all your apps and a new way to express who you are.”

“When we sense that people don’t like it and after we look at the feedback, we may make it simpler or constantly try to improve it,” he said, although he added he personally believes it is a “very powerful tool and it may take time to get used to it.”

“At the end of the day in order to make the platform work so that social applications can be built, it is important for developers to have a consistent format,” he said. “It is a lot more difficult to develop when you have multiple standards.”