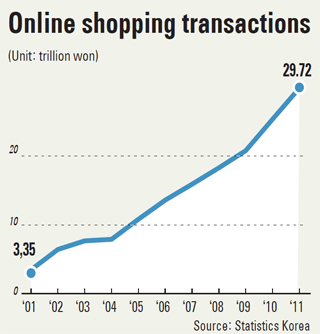 Internet shopping accounted for 10.3 percent, or 29 trillion won, of all retail sales, up tenfold from a decade earlier.

“Online transactions grew fiercely because it is convenient with the greater use of the Internet,” manager Sung Kyoung-je of the FTC’s e-commerce division said. “Online stores are now the second largest retailers following large supermarkets.”

Sung said whether online shopping malls frequently receive complaints is currently shown when consumers search for the name of the retailers on the major portal or FTC Web sites.

It collects complaints filed at the Korean Consumers Agency and Seoul Metropolitan Government, and if legitimate claims are filed more than seven times, the commission has publicly posted wrongdoings since March.

Complaints mostly target delayed processes in exchanges or returns, or never getting the products after the monetary transaction was completed.

A total of eight received the most complaints including the largest social commerce Web site, Ticket Monster, and Shoes Seong. Shoes Seong has already gone out of business.

“Who would want to buy products from these online retailers?” Sung said. “It is the power of consumers that pushed these companies out.”

Although he anticipates that the expansion of the online market will benefit consumers as it increases competition among offline retailers, he Sung said the online retailers first need to gain the trust of consumers.

“Since the transaction is not done face-to-face, there is a high chance of consumers getting a lack of information or untrustworthy information on products,” Sung said. “Also, consumers may worry that they have to pay first and then get the products later.”

Starting in August, online retailers are required to provide essential product information such as the manufacturers and materials for clothing; nutritional facts and ingredient origins for foods; and safety certificates and after-sale service information for electronic products.

It is also requiring the online retailers to use escrow for transactions starting in August.

Korea’s antitrust watchdog said it will impose fine worth 7.4 percent of yearly sales on the online retailers that violate regulations from now on.
By Lee Sun-min [summerlee@joongang.co.kr]