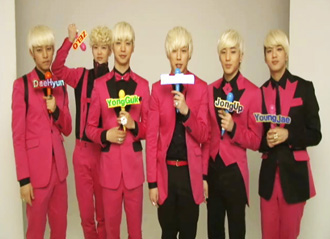 Boy band B.A.P will hold a live-stream chat on Tuesday with K-pop fans across the globe. The event is being orchestrated by one of the leading K-pop Web sites, allkpop.com, and will take place in the evening (EST).

Despite the time differences, fans from around the world are expressing their enthusiasm about the chance to speak to one of the hottest newbie boy bands of K-pop.

Fans will be given the chance to submit questions in advance as well as comment in real time on the Web site hosting the chat.

In case the number of fans connecting to the Web site exceeds 100,000, the company is currently looking into strengthening its server.

Allkpop.com has more than four million visitors a month and with one million friends on Facebook and 600,000 followers on Twitter. About 40 percent of the visitors are from North America, which is why the time slot convenient for U.S. nationals was chosen.

B.A.P debuted early this year and released its second EP, “Power,” in April.