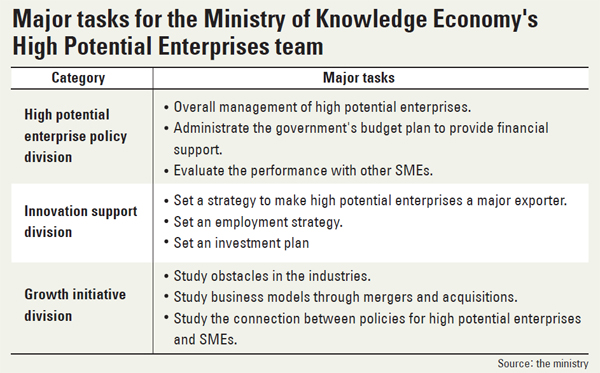 The Ministry of Knowledge Economy launched a new department this month supporting the growth of companies that fall between the bracket of SMEs and large conglomerates, but critics are already questioning whether, in terms of government budget, this was money well spent.

They ask why the national budget should support businesses that are already performing well, and why a new SMBA task force is needed when such jobs surely fall under the jurisdiction of the Small and Medium Business Administration [SMBA] anyway.

“I think the government needs to explain why it is prepared to help companies that are already running smoothly to become bigger” said research fellow Park Yong-gyu of the Samsung Economic Research Institute.

He said the move has already triggered more requests for tax cuts - which the new department advocates - on top of the R&D support that SMEs receive. Medium-size companies also get financial help building their respective work forces.

However, the Ministry of Strategy and Finance has not yet revealed whether it will authorize the tax cuts.

“We are still reviewing such measures and the decision is expected to come around August,” said Park Chun-ho, a director at the ministry’s tax relief division.

The companies under the purview of the new “High Potential Enterprise” department operate in a legal gray area as there is no clear definition in Korea for ones that rank between SMEs and conglomerates in size and scale.

The manufacturing sector uses the following definition: Companies with over 300 but less than 1,000 regular employees, or more than 8 billion won ($6.8 million) in gross capital.

The ministry claims there are over 1,300 of companies of this size in Korea.

“As the Small and Medium Business Administration was established 16 years ago to help smaller businesses position themselves in the industrial sector, now is the time to give growing medium-size business more momentum,” Knowledge Minister Hong Suk-woo said last month at a press conference prior to the launch of the department.

The plan came to fruition after President Lee Myung-bak suggested in February that the government would need a separate department for growing companies that fall within this size bracket.

Such businesses saw 350 trillion won in sales last year, accounting for 11.9 percent of total sales by Korean companies. They made up 12.9 percent, or $59.2 billion, of all exports and employed 8 percent of the national workforce.

In defending the creation of another agency, an official at the SMBA said it may have struggled to help them.

“Companies that outgrow their stature as SMEs can still enjoy the same tax breaks and other benefits for a three-year grace period, but apart from this, the administration is not able to offer them much support,” said an official.

“So it seems sensible that the ministry has taken over this job.”

An Jin-ho, who works in the newly created department, said such businesses have been sitting in the government’s blind spot.

“When they become bigger than SMEs, they immediately have to compete with large companies such as Samsung Electronics,” said An.

“These teams will act as spokespeople for these companies, much like the SMBA does for SMEs, or the Federation of Korean Industries does for large conglomerates,” said An.

“It will also help them map out long-term plans.”

The ministry aims to raise the number of “high potential” businesses supported by the new department to 3,000 by 2015.

Some analysts agree that companies on this rocky plateau between the SMEs and chaebol need a gentle shove.

“SMEs may want to remain inside this safe zone even though they have the potential to grow, so it’s good to give them an added incentive to break out of it.”