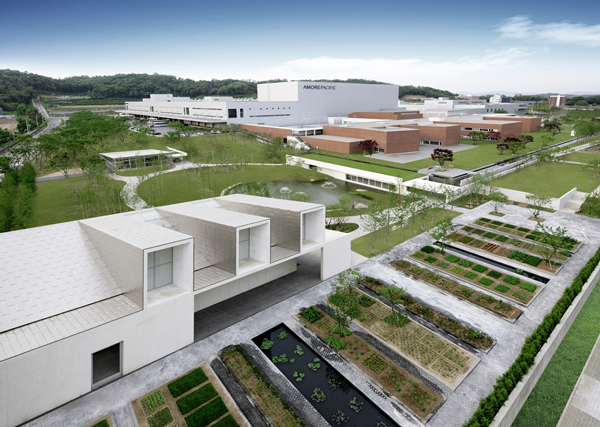 The view of Amore Pacific’s Beauty Campus, which was opened in Osan, Gyeonggi, yesterday. The facility integrated five pre-existing logistics and manufacturing facilities that produce the company’s Sulwhasoo,Mamonde and Laneige brands.


OSAN, Gyeonggi - What possible connection is there between a Toyota factory and a new cosmetics product?

According to Amore Pacific CEO Suh Kyung-bae, quite a big one for those who like to think outside the box and break the mold in search of future hit products.

Industry insiders say Suh has embarked on a crusade in the name of innovation, stressing the importance of new idea to his executives and urging them to look for inspiration - whether in terms of design, logistics or even administration - from the unlikeliest of sources.

At one recent meeting, he allegedly instructed them not to “feel shy about suggesting fresh ideas and either copying or recreating innovative models that have been adopted by other industries, even if think they have no link whatsoever with cosmetics.”

While all that glitters may not be gold, Suh’s craze for newness bore fruit yesterday when Korea’s No. 1 cosmetic maker opened Beauty Campus, its latest logistics and manufacturing center in Osan, Gyeonggi, about an hour’s drive south of Seoul.

“The time-honored wisdom that excellent products begin with high-quality materials holds true, but without a state-of-the art facility we cannot provide high-quality cosmetics to consumers even if we come up with great research results,” Suh said at a press conference at the center yesterday. 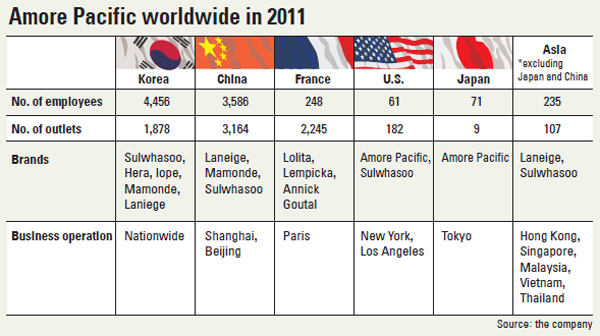 “Amore Pacific is getting more attention from international consumers than ever before. The Osan Beauty Campus is an advance base that will spread Asian beauty to the world.”

When asked why he avoided Incheon, known as an international logistics hub and home of the nation’s gateway airport, Suh said Osan more conveniently linked the company’s researchers at its R&D center in nearby Yongin with its marketing executives in Seoul.

He said Beauty Campus, which consists of production facilities for makeup and skin care products as well as a logistics center, provides a glimpse of the future of the cosmetics industry.

This was evidenced during a tour of the facility. A yellow robot on wheels dubbed the Automated Guide Vehicle (AGV) moved freely between manufacturing lines by following blue magnetic stripes on the ground and delivered materials in a big metal container to factory workers to reduce production time.

Although the campus opened yesterday, executives who were closely involved with designing it said they traveled the world for five years to benchmark state-of-the-art supply chain management (SCM) systems in order to create one tailored to Amore Pacific’s unique style and Suh’s management philosophy of “crumbling barriers between industries.”

“Normally, all industries typically use AGV robots and each one costs about 40 million won [$34,000], making them more expensive than a Grandeur sedan by Hyundai Motor.

“So instead of buying the finished product, we just purchased the wheels and motors and created our own robots tailored to our manufacturing needs. We now have over 30 at a saving of around 10 million won each.”

AGV robots are either guided by magnetic markers on the floor, by lasers or by wireless networks.

Amore Pacific engineers also came up with an automated conveyor belt that categorizes boxes of product from manufacturing lines and transports them to the logistics center.

Called Rail Guided Vehicles (RGVs), they were created based on ideas pooled during trips to the factories of Volkswagen, Audi and Mercedes Benz, as well as to rival cosmetics makers including Estee Lauder and Shiseido.

“Suh has stressed that there are not necessarily any boundaries across industries, and that the seamless integration of exemplary manufacturing processes is the only way to survive economically,” an executive said.

The center also consists of a garden where 200 different kinds of flowers and herbs are grown for research purposes. The public can tour the site for free, which the company cited as one example of its corporate social responsibility (CSR) programs.

Suh said Amore Pacific aims to jump from being the 16th biggest cosmetics maker to world No. 7 by 2020 with annual sales of 11 trillion won, almost half of them from overseas. It has already climbed from 25th place in 2005. 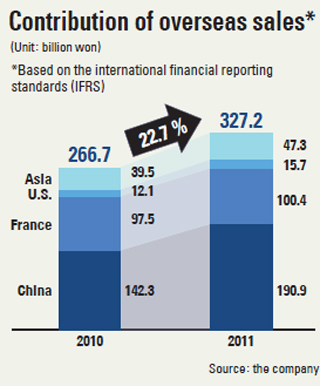 To make this happen, Suh said the company will aggressively tap overseas markets by seeking M&A deals. He also hinted that the crisis in the euro zone could turn up golden opportunities if European cosmetic firms are put on sale.

“Globally, demand for high-end perfumes is picking up,” Suh said. “We now run 13 perfume boutiques in France but we will open outlets worldwide later on.”

About 13 percent of the company’s sales, or 327.2 billion won, were generated overseas last year, but the CEO said he hopes to penetrate emerging markets like Indonesia and India to ramp this up to 45 percent within eight years.

Amore Pacific has 10 operations outside Korea, including in China, Hong Kong, France and the United States.
By Kim Mi-ju [mijukim@joongang.co.kr ]