Travel agencies are protesting cheap airplane ticket sales by E-Mart out of fear the move will threaten their businesses.

Earlier this month, the nation’s biggest discount store chain offered tickets to popular destinations in the region such as Taipei and Osaka at reductions of up to 40 percent. 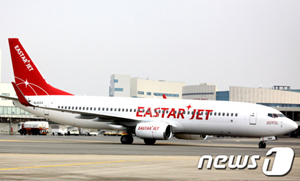 Although the sale only lasted for a week, from May 17 to 23, it was considered a success with 30 percent of the tickets sold. It also marked a new foray for a local discount store.

An association of travel agencies sent a letter to E-Mart on Tuesday expressing its concern at the store’s aggressive sales campaign.

“E-Mart registered itself as a travel business [in April] and started selling discount tickets,” the association wrote. “As this poses a direct threat to small- and medium-size travel agencies, we respectfully request the sales be discontinued.”

In partnership with Eastar Jet, a local budget airline, E-Mart sold round trip tickets from Incheon to Tokyo and Osaka, Japan, and from Incheon to Songsha, Taiwan, at rates significantly lower than those offered by major airlines.

Including airport tax and fuel surcharge, a round trip ticket to Osaka went for around 211,000 won ($180), compared to the official ticket price of 280,000 won offered by Jeju Air, the country’s leading low-cost carrier. Korean Air, the country’s biggest airline, offers the same two-way flight for 335,000 won.

Out of 4,000 seats available, E-Mart sold 1,200. Considering that Eastar Jet is less recognized than its rivals and June is traditionally an off-peak season, the promotion seems to have paid off.

E-Mart’s success has unnerved travel agencies as commissions from airplane ticket sales account for a large portion of their revenue. Ticket sales make up around 65 percent of their business and they benefit from commission fees ranging from 7 to 9 percent.

“E-Mart is not charging commissions and it is not collecting penalties on changed schedules or cancellations. It is distorting the market,” the association wrote.