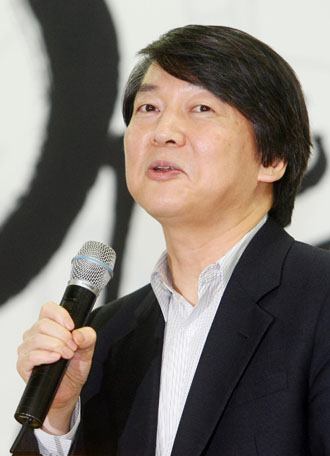 Popular software developer and professor Ahn Cheol-soo has once again deferred a decision whether he will run for president, saying he is still thinking about whether he will be able to meet people’s expectations as a politician.

Ahn’s lecture Wednesday at Pusan National University in Busan drew intense media attention due to the possibility of him finally announcing his presidential bid after months of contemplation and media speculation. But he gave no clear-cut answer this time again.

“I am in the course of questioning myself about whether I can make sure I won’t breach social expectations for myself if I get involved in politics,” Ahn said before a capacity crowd of about 2,500 people packing an indoor stadium at the university.

Ahn, 50, has been widely considered a potential opposition candidate in December’s presidential vote since he demonstrated powerful influence over voters during last October’s Seoul mayoral by-election. But the soft-spoken professor of Seoul National University has never made his intentions clear.

“Politicians state their aims to the public and act based on support from the people. But in my case, I think public yearnings for social change have been vented via myself,” he said of his popularity.

Analysts have also said Ahn’s popularity illustrates the distrust South Koreans have of existing politicians and political parties, which have often come under fire for engaging in factional and partisan fighting without caring for ordinary people.

The public sees Ahn as a fresh alternative to the current political establishment, they say.

Ahn, a former medical doctor who gained fame in the 1990s after establishing the anti-virus software firm AhnLab, is widely popular, especially among young Koreans. Yonhap