CPI shows gov’t has a harness on inflation

CPI shows gov’t has a harness on inflation 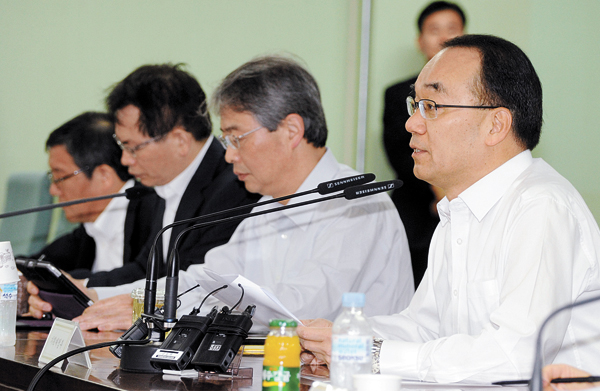 Finance Minister Bahk Jae-wan, right, said he is not considering raising public utility bills even though consumer prices have begun to stabilize in recent months to within the 2 percent range. Bahk issued the remarks during a tactical meeting held at the government complex in Gwancheon, Gyeonggi, yesterday. [NEWSIS]


The government has successfully brought consumer prices down to within the 2 percent range for the last three months, according to Statistics Korea.

The consumer price index rose 2.5 percent in May from a year earlier, the same on-year growth that was tallied in April. On-month, it edged up just 0.2 percent in May, the statistics agency said yesterday.

The figures give Seoul much-needed room to breathe and allow for further easing of its monetary policy as fears of contagion from an economic meltdown in Europe continue to gain steam.

For the whole of 2011, the index grew by a considerably higher 4 percent as the government scraped within the upper threshold of its inflation target cap.

Core inflation, which excludes volatile oil and food costs, grew 1.6 percent in May from a year earlier, marking another improvement from the 1.8 percent growth posted in April.

“Fresh farm produce, some industrial goods and fuel pushed up prices, but such gains were offset by weak growth in the service sector, such as payments covering childcare and telecom fees,” said Ahn Hyung-jun, head of the agency’s prices statistical division.

Some of the biggest reductions were seen in areas that benefited from increased welfare spending, with childcare costs plunging 34 percent and school lunches dropping 19.3 percent on average after the government began subsidizing meals for pre-schoolers in response to public demand. 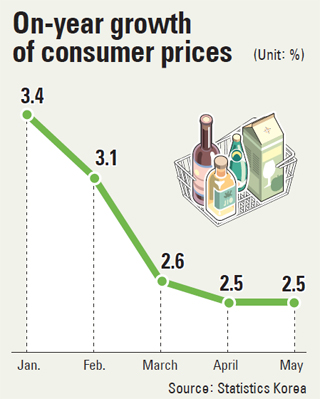 Prices for food, farm produce and nonalcoholic beverages shot up by a combined average of 6.5 percent, while clothing and transportation prices rose 5 percent and 4.9 percent, respectively.

The latest report also showed that the 0.2 percent increase in consumer prices vis-a-vis April was due in part to seasonal factors such as a rise in demand for summer clothing.

Rent also gained 4.5 percent on-year and 0.3 percent from April, which could exert further inflationary pressure down the line, according to the report.

In recent months, as the euro zone crisis continues to show little signs of abating, there have been growing concerns over what its impact will be on the Korean economy.

Just last month, the Organization for Economic Cooperation and Development downwardly revised its forecast for the domestic economy this year to 3.3 percent. This is far lower than the outlooks presented by both the government and central bank. Meanwhile, speculation has mounted that the government will ease its monetary policy to provide much-needed stimulus measures.

“The easing of consumer price growth has generated a growing sense of relief, and this has created an environment where people feel safer calling for higher utility bills and processed food prices,” Bahk said.