Park, a force of nature at GP, bags four gold

Park, a force of nature at GP, bags four gold 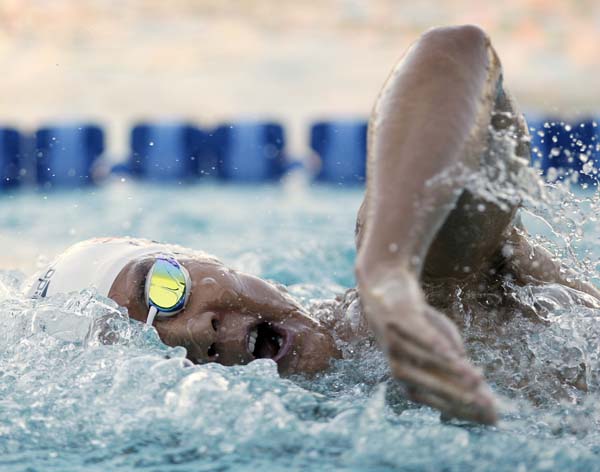 Park Tae-hwan competes in the 400-meter freestyle final at the Santa Clara International Grand Prix on Friday in California. Park won four freestyle events - 100, 200, 400 and 800 - at the Grand Prix. [AP/YONHAP]


Korea’s great hope in the pool Park Tae-hwan showed he is on pace to defend his men’s 400-meter freestyle Olympic title in London this summer by collecting four gold medals at the Santa Clara International Grand Prix over the weekend.

He wrapped up his final race at the California swimming meet on Saturday by winning the 200 freestyle in 1 minute, 46.88 seconds. He was almost two seconds ahead of training partner Ryan Napoleon of Australia. Japan’s Yuki Kori clocked 1:49.36 for bronze.

Even though his winning time was tenths of a second behind his performances at the Dong-A Swimming Championship in April (1:46.09) and the Mel Zajac Jr. International last week (1:46.75), critics took a forgiving tone in light of his punishing schedule.

Park clinched the 800 on Thursday before winning the 100 and 400 the following day. Although top swimmers like Michael Phelps of the U.S. (200), China’s Sun Yang and Germany’s Paul Biedermann (both 400) were absent - giving Park an easier run - he set the results laid a solid foundation for success on London’s grand stage.

“I think I drew a good sketch here,” an ebullient Park told local reporters after the event, speaking metaphorically. “If I can fill in all the colors at the Olympics, we’ll see a fabulous picture.”

Park tested all aspects of his ability during the event and showed he is revving up to top gear.

Although it is not an Olympic event, Park said training for it gives him an edge in terms of building stamina for his signature race, the 400.

It was Park’s third-best time of the season at the longer race. He came close to beating top rival Sun’s season-best 3:42.31 last week by notching 3:44.22 in Canada.

Park, who collected three golds in Santa Clara last year, said his pace and rhythm are fine but kinks remain.

“Compared to last year, I think I’ve improved my starts, but my turns still need some work,” he said. “But overall I’m taking a lot of positives from these races and I’m starting to feel in the groove now.”

Park is scheduled to return to Korea tomorrow briefly before he heads to Australia for his fifth overseas training program. He will head to London after wrapping up the final session in Italy in the middle of July.

“There’s not going to be any let up from here on in,” he said. “As the Olympics are less than two months away, I’ll be focusing more on my strategy and pace.”

Australian coach Michael Bohl said the swimmer is on his way to defend his crown.

“I think London’s going to be a very tough competition .?.?. So, having the good rises over the last two weeks will help him prepare for that,” he was quoted as saying by YTN.