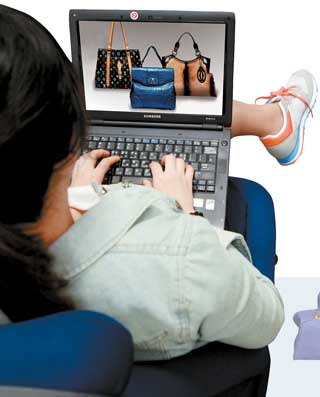 Only those with more money than sense splash out on designer-brand bags such as Chanel and Gucci at local department stores, local consumers say.

Sales of luxury bags and wallets at the nation’s three leading department stores dropped for the first time in three years in April as fashion-savvy shoppers increasingly head online to lighten the load of keeping up with the Joneses.

In a single recent three-day promotion for Prada bags and wallets it netted 55 million won ($46,600) in sales, indicating the burgeoning demand and huge profits that so-called “recession-proof” luxury goods can garner, it said.

The site was able to drive up demand by slashing prices on products that normally retail for between 400,000 won and 1.9 million won by up to 40 percent.

As of April, luxury items made up 30 percent of the online retailer’s entire fashion sales, it said. This suggests an image makeover may be on the cards for such retailers as they have, until recently, been known as purveyors as low priced rather than prestigious goods.

In the past, sales of luxury goods at department stores have tended to register double-digit annual growth through thick and thin, but lately sales have been shrinking at big stores with the Internet picking up the slack.

According to statistics by the Ministry of Knowledge Economy, combined on-year sales of such products at Lotte, Hyundai and Shinsegae department stores dropped 5.9 percent in April, the first case of negative growth in 26 months.

In contrast, online site Interpark saw demand for designer goods surge 16 percent on-year in the same month. Of total sales, consumers in their 20s and 30s accounted for 57 percent, it said.

Retailers claim the prolonged economic downturn - including rampant inflation, a narrowing job market and a stagnant property market - has created a fad they dub ‘half-priced fever’ among young shoppers. This began with daily necessities and is now seeping into luxury items, they say.

It said sales are growing by an average 20 percent a month. Private Lounge now has two million members and it attracts 80,000 visitors a day. Average purchases stand at 300,000 won, it said.

When the mall reopened under the new management it created an immediate buzz by selling out of its stock of Chanel’s Caviar 2.55 bags in 30 minutes. The bag sold at a 20 percent discount from the 5.3 million won retail price.

Retailers note that consumers of luxury goods now care less about being treated like royalty by obsequious sales staff and are more interested in savings.

“Consumers like us because we are poised midway between expensive but reliable conglomerates and online auctions like eBay, where you’re never sure what you are getting,” said Oh Seung-hyun, who works at Private Lounge.

Consumers are also hunting online for high-end products in other segments such as premium childcare and household items, the sites claim.

Interpark has been selling 1,000 items from 16 premium kitchenware brands such as Germany’s Fissler and Britain’s Royal Doulton at discounts of up to 40 percent since January.

In March it launched an online site for premium baby products such as Stokke strollers. New parents can now pick one up for 1.2 million won, saving 700,000 won.