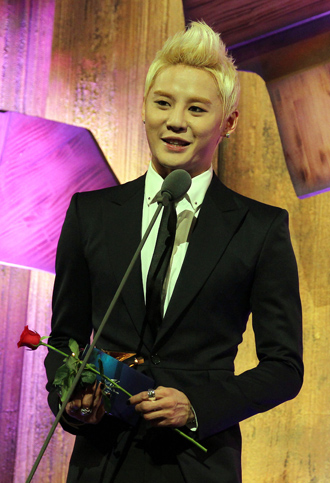 JYJ’s Kim Jun-su took home the “Most Popular Musical Actor” award for his acting skills in the musical “Elisabeth” on June 4 at the annual The Musical Awards which took place at the National Theater in Jangchung-dong, central Seoul.

After his win, Kim manned his Twitter account to thank fans and followers alike, as well as air his gratitude.
“I am so thankful for my fans. In the last three years, I’ve been given the opportunity to act with some of the best actors and it’s such an honor to even be a candidate for two-years running. I thank you all again, and I love you all,” said Kim on June 4.

A little while later, Kim tweeted again saying, “Oh and today, I definitely think I’ve filled my quota for TV. I was also happy because of the musical,” said Kim.

The award that Kim won was decided through public voting. It was the third time in a row that he had won the award.