Defector gets back at ‘traitor’ abuser

Defector gets back at ‘traitor’ abuser

Baek Yosep, the North Korean defector branded a “traitor” by opposition lawmaker Lim Soo-kyung in an alcohol-fueled restaurant shouting match last Friday, got back at her in a phone interview with the JoongAng Ilbo.

He said that when Lim made her famous trip to Pyongyang in 1989 in which she met North Korean founder Kim Il Sung, North Koreans considered her a major hero and role model.

But when she returned to South Korea and wasn’t immediately executed, they started to realize the South was a lot more liberated than they ever imagined. And when she went on to have a successful career, they understood that they were the ones who were living in hell, and many were moved to defect from the North. 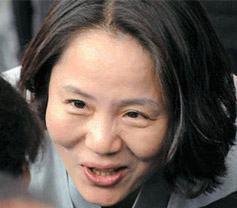 Lim, a proportional representative of the opposition Democratic United Party, traveled to North Korea in 1989 to attend a ballyhooed event called the Pyongyang World Youth Festival, which was a kind of response to Seoul’s successful 1988 Summer Olympics. She was a member of a pro-North student activist group in the South and didn’t receive permission for the trip from the South Korean government. She stayed in Pyongyang for 46 days, met Kim Il Sung, spoke against the South Korean government and the U.S., and returned via the border village of Panmunjom. She was sentenced to five years in prison for violating the National Security Law in December 1989 and was released in 1992.

Baek, now 28, was five at the time of Lim’s widely publicized visit.

“At the time, among North Koreans over the age of five, there was no one who wasn’t fan of hers,” Baek recalled. “For them, she was the first South Korean youth who crossed the deadly militarized border and shook hands with our ‘dear leader.’?” She was a sort of “idol,” he said, who came from the outside world, and some people in the North dubbed her the “flower of reunification.”

But she startled them at the same time, especially with her appearance.

Wearing blue jeans, a white T-shirt and white sneakers, Lim’s personal belongings were seen as high-quality products by North Koreans, who had thought the South’s people were dying of hunger as a “colony of the imperialistic U.S.”

She surprised North Koreans again when she returned to the South by walking through the border village of Panmunjom.

“When she went back, every North Korean cried,” Baek said. “We thought she would be executed right after she crossed the border. But she wasn’t shot, and that was a bigger shock to North Koreans.

“She wasn’t executed in prison and was even released, and then she became a journalist and wrote some columns praising then-President Kim Young-sam [known as an anti-communist],” Baek said. “North Korean textbooks now say that Lim was raised in a bourgeoisie family and her elder brother became ‘a general for the puppet regime of the South.’?”

“For North Koreans, she’s now the one who is called ‘traitor,’ not the ‘flower of reunification.’?” Baek said.

Baek also said that since the ugly scene in the restaurant last Friday, Lim has requested a meeting with him, but he rejected it.

“I thought this matter shouldn’t be settled with an apology only to me,” he said. “All of the 20,000 North Korean defectors were upset by her remarks.”

“I won’t label her ‘pro-North,’?” he said. “She was just deceived by the North Korean government, and now she can’t get away from her wrong thinking.”