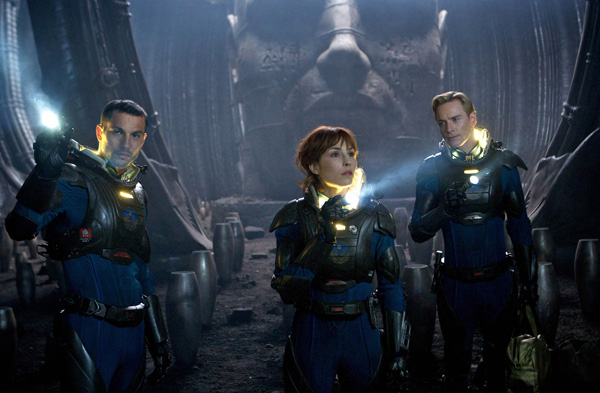 
Nothing could possibly satisfy the fervent expectation that has built for Ridley Scott’s sort-of-prequel to his genre-defining “Alien,” but “Prometheus,” the director’s return to science fiction for the first time in more than 30 years, comes close.

Strikingly beautiful, expertly paced, vividly detailed and scary as hell, it holds you in its grip and doesn’t let go. You’ll squeal, you’ll squirm - at one point, I was curled up in a little ball in my seat - and you’ll probably feel a lingering anxiety afterward.

But the further you get from outer-space journey, the more you may notice some problems with the plot - both specific, nagging holes and a general narrative fuzziness. Describing some would give too much away. We’ll just say that Scott and writers Damon Lindelof (executive producer of “Lost”) and Jon Spaihts vaguely touch on the notions of belief versus science and creation versus Darwinism, philosophical debates that never feel fully developed.

Still, the performances are excellent, especially from Michael Fassbender as a robot with the looks and impeccable manners of an adult but the innocence and trouble-making instincts of a child. His character, the genteel, fair-haired David, serves as an homage to Scott’s own work as he calls to mind Ian Holm’s android Ash from the original “Alien.” His eerily calm, precise demeanor also is reminiscent of the HAL 9000 computer program in “2001: A Space Odyssey,” and the pop-culture influences that shape David’s habits and speech are a clever celebration of the power of classic cinema in general. (“Prometheus” probably will not go on to be considered one of Scott’s classics in the same category as “Alien” and “Blade Runner,” but you’ve got to admire its ambition.)

David is part of a crew of space explorers traveling to a remote moon on a trillion-dollar mission in the year 2093, hoping to find answers to nothing less than the origin of mankind on Earth.

Noomi Rapace, star of the original “Girl With the Dragon Tattoo” films, continues to forge a strong screen presence as Dr. Elizabeth Shaw, a scientist who has managed to find a balance between her religious faith and her work-related discoveries. She and her boyfriend, the more spiritually skeptical Charlie Holloway (Logan Marshall-Green), have found signs in spots around the globe that aliens visited tens of thousands of years ago and left us an invitation to swing by and say hello whenever we had a chance.

At least that’s what they think.

The rest of the crew includes Charlize Theron, radiating icy intimidation as the administrator from the private corporation funding the trip, and Idris Elba as the ship’s sexy, smart-alecky captain. Everyone else is probably a goner. If you’ve ever seen this kind of movie, you know this is not a spoiler.

When they all finally awaken from their two-year sleep and arrive at this gorgeously severe land, they stumble upon secrets and perils they never could have imagined. Some of them are gooey.

That’s about all we’ll say about that, because you really should experience it all for yourself.

But the paranoia becomes palpable, and a lot of its impact comes from the dramatic and dazzlingly seamless special effects. Scott makes crisp, immersive use of 3-D in “Prometheus,” providing encounters that would seem too close for comfort with a nerve-wracking sense of claustrophobia.

The reason for the journey may seem a bit muddled, but what happens once they get there is undeniably powerful.