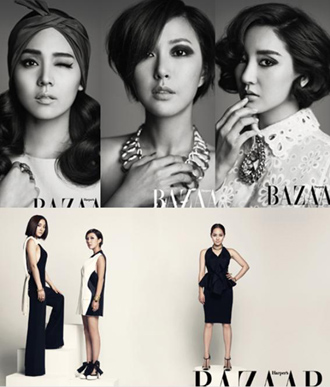 Girl group S.E.S. recently reunited some 10 years since it disbanded. The three ladies, Bada, Eugene and Shoo, took part in shooting an advertisement for the fashion magazine Harper’s Bazaar.

In the interview accompanying the pictorial, the girl group members said that they parted in order to leave the girl group’s name untarnished.
“We were young and we promised that years from then we’d work again as S.E.S., but we’d be better than before,” said the girl group.

Currently, the trio is working on a charity project titled “Green Heart,” a charity sale geared towards helping out a young cellist living in poverty named Min-ho. Personal items belonging to the three as well as a T-shirt designed by Eugene will be on sale at the bazaar, scheduled to take place on June 9 in Nonhyun-dong, southern Seoul.
By Carla Sunwoo [carlasunwoo@joongang.co.kr]