Lighten up at the Muju Firefly Festival

Lighten up at the Muju Firefly Festival

Sunsets along the Han River and the Seoul skyline from Namsan Tower are breathtaking sights on a summer evening in Korea - but even the most grandiose views in the capital can be ruined by crowds or noise pollution.

For those looking for a mesmerizing show of lights while connecting with nature at the same time, the Muju Firefly Festival could be the perfect early summer getaway.

Entering its 16th year, the festival offers a fun-filled program that is sure to impress with the exotic ambience created by fireflies and a host of other activities.

The festival is considered one of the most environmentally-friendly festivals in the nation. It has been named an “excellent festival” for 14 consecutive years by the Ministry of Culture, Sport and Tourism, with more than 720,000 people visiting last year alone.

This year’s Firefly Festival started yesterday and will run until June 16 in Muju County, North Jeolla. The theme for 2012 is “One World United With the Glow of Fireflies.”

“We will make this festival an environmental festival, a hopeful festival that lights dreams for the future and a heart-moving festival that draws happiness,” said Hong Nak-pyo, head of Muju County. 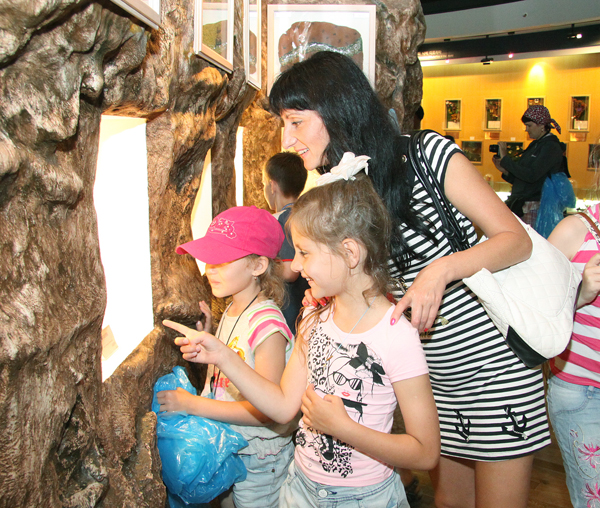 
The glow of fireflies

The firefly has been designated as national treasure No. 322 by the Korean government and is known as an insect that reflects the level of environmental cleanliness in an area, as they are sensitive to pollutants. While many natural habitats have been damaged by agricultural pesticides, Muju County has preserved its environment and has become a safe haven for the incandescent insect.

To see the yellow lights floating in the air, visitors should participate in the program “Magical Exploration.” The experimental program will mainly take participants along a bandi masilgil (dirt road) in Muju-eup, Jamdoo Village. The organizers have pre-inspected the sites and set up courses in order to provide views of a large number of fireflies.

While going to the village on a bus, tour guides will inform participants about fireflies and their natural habitats. Upon arriving at the site, visitors will see fireflies while walking along a five-kilometer (three-mile) walking trail that is delineated with signaling lights.

Visitors can make reservations online at www.firefly.or.kr or at the site. Tickets for children under the age of 8 are 3,000 won ($2.50) while those for adults are 5,000 won.

The program doesn’t guarantee that fireflies will create a spectacular view as the insect is very sensitive to weather changes, but in the ideal conditions, the fireflies and stars should be breathtaking.

For those traveling with children who may not make it to the night expeditions, the fireflies do glow during the daytime as well. At the Yeche Culture Center or Bandinara Hall near Jinam Park, organizers have created an indoor space that mimics the outdoor environment in order to see the bugs light up during the day.

A puzzle game related to fireflies inside the center is a perfect activity for families with children. There is a festival “history hall” where visitors can catch a glimpse of the festival’s 16-year-old history.

Visitors are also recommended to visit Bandi Land, an insect museum that was opened in 2007. Located in Muju-eup, the museum has more than 2,000 species, 13,500 insect specimens and 200 species of botanical plants. There is also an astronomy science hall and a cabin where visitors can stay for a night.

Bandi Land is home to the Firefly Nature School (Firefly Laboratory). While during the year this is a center for research, Bandi Land has opened it up to a few visitors. Through various video and audio clips, those who get a glimpse of the scene have the chance to learn from experts about the life of a firefly. The program at the laboratory runs throughout the festival, but only 40 people will be able to participate per day on a first-come, first-serve basis. Visitors can make reservations through its Web site, www.bandiland.com, or call 063-324-1155. 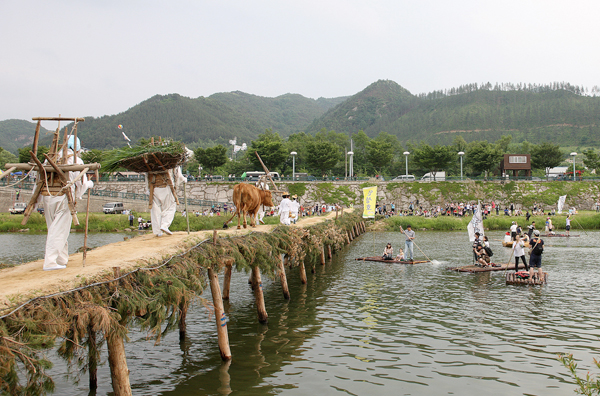 Traditional performances on a seopdari (traditional bridge) at Namdae Stream are one highlight of the Muju Firefly Festival.


Experience the traditional culture of Muju

The festival is not only about fireflies, but also a stage for Muju’s traditional cultural events. One of the highlights of the entire festival is walking down the seopdari (historic bridge) at Namdaecheon (Namdae Stream).

This event became a mainstay of the festival in 2006. Seop Bridge is a temporary bridge constructed of logs, mud and pine branches. Traditionally, the bridge was built from early winter until the summer when heavy rain would wash the original bridge away.

The residents of Muju install the bridge in a traditional way and demonstrate traditional weddings, funerals and nongak (farmer music) performances. There will also be a hanbok (Korean traditional costume) fashion show on Seop Bridge.

This program will be shown only three times during the festival period: today, tomorrow and June 16, the last day of the festival.

During the nighttime at Namdae Stream, nakhwanori (traditional fireworks) are also worth watching. The nakhwa of the word means “falling flower.” The event became a main program in 2008 and this time residents from Doomoon Villiage in Muju-gun, Geumpyeong-ri, will re-enact the performance.

On a rope suspended across Namdae Stream, a bundle that is covered with hanji (Korean traditional paper) is hung. Inside that bundle are mulberry tree branches, charcoal and salt. When the wick is lit, the sound of burning and the fire floating in the wind creates an interesting light show.

At Namdae Stream, Didilbanga Aekmaginori (a traditional ancestral rite) will also be performed. The event won the Ministry of Culture Award at the 41st Korea Traditional Arts Festival.

The traditional festival, also called Bangatgeorinori, is passed down among residents from Muju-gun, Bunam-myeon. The performance is some 300 years old and originated when a contagious disease swept through the village. After the incident, the residents prayed for the health of their village. This ritual has evolved into a grand street festival during which more than 100 residents perform traditional dances and nongak while walking down the streets.

Gijeolnori is also an interesting traditional festival that hails from the Muju-gun, Mupung-myeong area. The event began when people from villages bowed to each other with agricultural tools with tidings of harmony and cohesion. The flags and performances of nogak bands make this event at Namdae Stream a spectacular one. 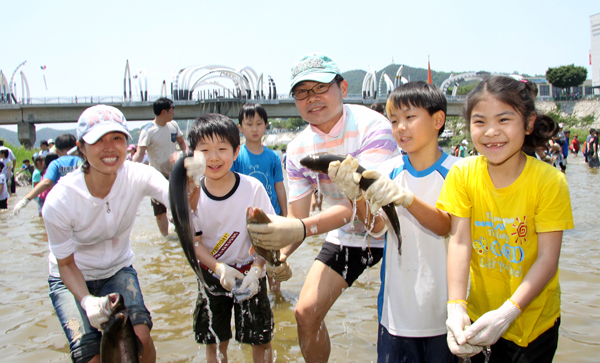 A family catches trout with their bare hands at Namdae Stream during the festival. Provided by Muju County


A lot more than insects

The festival is packed with various events that will keep visitors entertained throughout the day. One popular program is at Namdae Stream, where visitors can catch trout with their bare hands. They can also cook the trout on site. Rafting on the stream is also an option.

There will also be a dance competition, a firefly song festival, youth soccer tournaments and photo exhibitions.

At Bandigol Traditional Craft Culture Village, the Kim Hwan-tae Literature Hall and Choi Buk Art Museum will be opened to the public for the first time.

At nighttime, visitors can walk under the Milkyway Tunnel. The 90-meter-long tunnel is covered with beautiful lamps.

Movies will also be shown for free at Deungnamu Play Ground. Organizers said that they have English translators and English brochures for foreign visitors. There will be also applications for smartphone users.

Each day has a different schedule of events. Generally, the festival program ends at 11 p.m. on weekends and 10 p.m. on weekdays, but visitors are recommended to visit the festival’s official Web site (www.firefly.or.kr) or call 063-324-2440 before visiting.