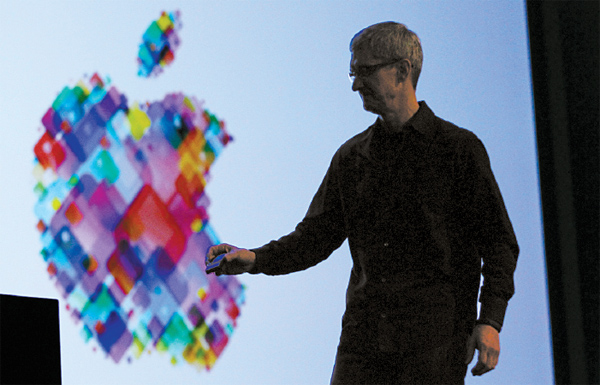 Apple CEO Tim Cook speaks at the Apple Developers Conference in San Francisco on Monday (local time). Apple said it is about to introduce a laptop with a super-high resolution "Retina" display to set a new standard for screen shrpness. The new MacBook Pro will have a 15-inch screen and four times the resolution of previous model, Cook told developers.


Apple announced at the annual worldwide Developers Conference in San Francisco on Monday it will make its FaceTime video call system for iPhones and iPads work on cellular networks.

That’s bad news for SK Telecom and KT, the two mobile carriers that circulate Apple mobile devices in Korea, who were already worried about their networks being overwhelmed by data-gobbling services.

Claiming that mVoIP, or free call services over the cellular network they have built, might undermine their profits from voice calls and the quality of services, both companies have insisted they have no choice but to raise basic rates in the near future. Except for LG U+, the third player that scrapped all restrictions on mVoIP last week, SK Telecom and KT allows only users who pay 54,000 won ($46) or more per month to make free phone calls and it puts limits on how many they can make.

“We intend to apply the same measuring stick to FaceTime as to other mVoIP services when it comes to monthly charges and data limits,” said a spokesman for SK Telecom. KT said it has the same stance.

Free voice calls made widely available through KakaoTalk’s Voice Talk will necessitate more capital expenditure by SK Telecom and KT due to an increase in data traffic, Moody’s Investors Service said, adding it will also chip away at their revenues for voice services.

In addition to the FaceTime upgrade, Apple CEO Tim Cook, who took over from late co-founder Steve Jobs last August, unveiled new features of the software that will ship this fall for the iPhone 4, iPhone 4S, iPad 2, new iPad and fourth-generation iPod Touch, plus a flurry of other new services and products.

One piece of good news for Korean users of the iPhone 4S is that Siri, the voice-activated, intelligent search engine and personal assistant, will soon work in Korean as well as Chinese, Spanish and Italian.

Other big announcements include Apple ditching Google’s mapping software in favor of its homegrown Map service, and deeper Facebook integration, which implied a growing relationship with the social networking service.

Cook also found time to introduce new versions of the MacBook range of laptops, including a 15-inch MacBook Air and an all-new MacBook Pro, which the presenter called “the greatest Apple computer ever built.”