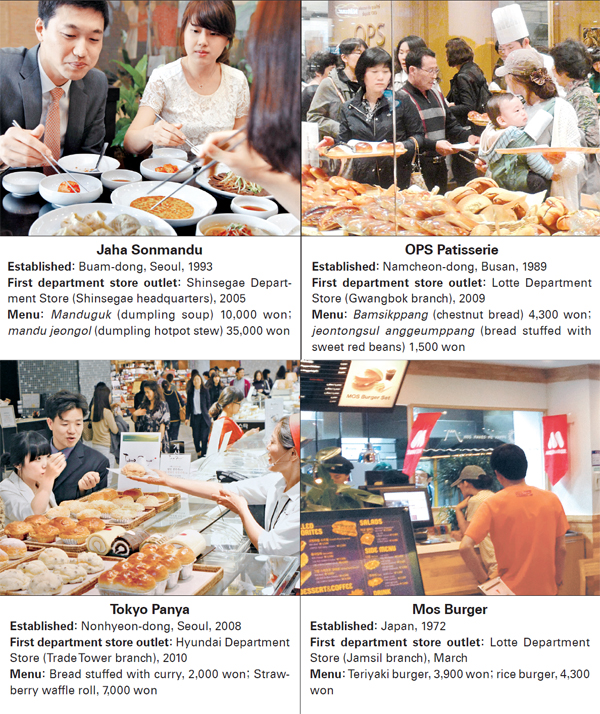 Department stores feeling the pinch of the economic downturn are in heated competition to persuade popular restaurants to open branches in their stores.

But it’s a hard task. Retailers say nine out of ten of the restaurants they approach turn up their noses, thinking they will lose the cachet of exclusivity if their branches are patronized by the hoi polloi or even relatively upper-class department store shoppers.

The reason the department stores care is they’ve discovered that shoppers who have a meal in their stores tend to buy more than people who don’t.

One afternoon last August, Lee Jae-cheol, a member of a food team from Shinsegae Department Store, cooled his heels at Baljae Banjeom, a Chinese restaurant in Ichon-dong, central Seoul, hoping to get a word with its owner.

The owner had refused to make an appointment to see Lee, and he dropped by to try his luck face-to-face. The staff lied that the owner was busy eating, even though he had actually finished his lunch of jjajangmyeon, black bean noodles, a few hours before.

Lee pleaded with the staff to give his business card to their boss. As the days went by, he didn’t receive a call.

Lee didn’t give up. He visited the restaurant four times a week and made countless phone calls until he finally corralled the owner four months later.

“I finally got the green light from the owner after I promised that the restaurant would get a prime location near the escalator and high sales,” Lee said. “I also promised that his restaurant would be advertised in the shopping booklets we mail to customers to notify them of sales and special events. I insisted he could expand his influence from Seoul to Gyeonggi. You have to be a master of psychological warfare to win the hearts of restaurant owners.”

The other restaurants that Shinsegae lured into its Uijeongbu outlet include Wataru, a ramen house from Busan, and Saint Augustin, a French-style Thai restaurant in Seorae village, southern Seoul.

Shower effect
Aside from Shinsegae, which is Korea’s No. 3 department store, Lotte and Hyundai, the No. 1 and No. 2 players, are also trying to lure hot restaurants into their buildings. Customers who dine on the ninth and tenth floors of department stores, the restaurant floors, will spend more.

Lotte said 45 percent of the customers who dined in their top floor restaurants last year bought more than one product at the store, often on the way down after eating.

Interestingly, 10.9 percent of the customers who ate at the retailer’s restaurants bought imported fashion items and 8.1 percent bought cosmetics.

“The figures show that 19 percent of customers who used our restaurants bought the store’s top-selling items,” said Na Jae-woong, spokesman for Lotte.

Retailers say this is a typical part of the “shower effect” marketing strategy. By placing popular goods on the very top floor of a store, sales on the lower floors increase.

Hyundai Department Store said people who dine at its restaurants spend more, have higher loyalty and come from farther away. The restaurants lure them in.

Shinsegae said customers who ate at the retailer’s restaurants more than 10 times last year and paid with a Shinsegae credit card accounted for 75 percent of the retailer’s entire sales.

Nadri wasn’t featured in newspapers articles or blogs. A Hyundai employee fell in love with the kimbab at Nadri restaurant, which was located near Jamsil Girls High School, and he mentioned the place to a colleague in the food department.

To get more of those winning suggestions, Hyundai has been running a “gourmet network” Web page on its internal network since 2008. Hyundai employees can post reviews and pictures of restaurants they have visited.

“The Web page helps us to find authentic gourmet restaurants and avoid restaurants that became famous only after doing intensive promotions,” said Shin Hyun-goo, the Hyundai official who created the Web page.

Lotte is expanding what it calls its “Food Street.”

The food court and restaurants at Lotte’s Pyeongchon branch opened in March, and they take one-fifth of the store’s entire space.

Lotte’s Jamsil branch opened a Mos Burger outlet in March when the retailer finished renovation of its food street.

Mos Burger originally intended to open its first Korean store at a stand-alone location in Gangnam in April, but it changed its mind after Lotte negotiated with the Japanese burger giant for six months.

Lotte said its Mos Burger outlet had 1.7 billion won ($1.5 million) in sales last month, making it the most popular among the 13 restaurants in the store.

“Our main target, young consumers, flock to restaurants and we’ve been making more investments in this sector,” said Na of Lotte.