Daily deal sites like Groupon Korea and Coupang have seen their revenue grow here dramatically over the past two years.

Although the combined monthly trading volume of the four big players in the country, including Ticket Monster and We Make Price, surpassed 100 billion won ($85.7 million) in February, none had ended a month or quarter in the black until last month.

But all this changed when Coupang, the No. 1 domestic player, and We Make Price, which ranks third in Korea, announced on Monday that they both posted a monthly net profit in May for the first time.

“It is significant that our monthly profit did not result by temporarily reining in expenditures on marketing or service,” said Coupang CEO Kim Bom in an interview Tuesday in southern Seoul. “We have actually been investing more in recent months in customer service, such as running a customer call center all year round and establishing our own logistics center.”

On whether he expects to end the second quarter safely in the black, the 33-year-old Harvard-educated CEO said it was hard to predict given that this period traditionally sees slow sales as people cut back on shopping and head off on summer vacations.

But he was confident the shift to monthly profit has brought the 22-month-old company one step closer to its goal of listing on the Nasdaq. Coupang currently has 12 million registered customers, about one-fourth of the Korean population.

In contrast, We Make Price, said it benefited hugely from cutting back on its marketing expenditure beginning last July. It was established in October 2010 and recently leapfrogged Groupon Korea to steal the No. 3 spot.

More good news is emanating from the United States, where daily deal sites first sprang up. Groupon, the world’s biggest player, surprised analysts in mid-May by announcing its first-ever quarterly profit. The news followed months of disappointment as its stock has nose-dived since the company went public last November.

Its Korean operation, launched in March 2011, has been focusing on luring upwardly mobile women in their 20s and 30s with pricey goods and luxury products to discern itself from its rivals. Analysts have been skeptical about the financial prospects of the hundreds of deal-of-the-day sites operating in Korea, whose combined sales are estimated at over 1 trillion won this year.

Many have been criticized for drastically slashing their commission fees, the key source of their profit, to grab more deals with product vendors amid intensifying competition.

Some sites adjusted the commission rate per product to as low as 3 percent, creating a vicious circle of deteriorating profitability. But the industry average has now normalized to around 15 to 20 percent, said a spokeswoman for Ticket Monster, adding that only smaller, less stable firms tend to offer dramatic rate cuts these days. 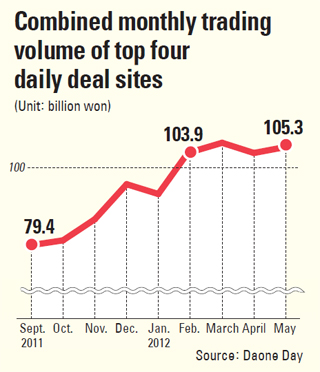 Additionally, many sites are seen as being overly extravagant in terms of marketing. Ticket Monster spent almost 80 percent of its sales revenue on marketing and advertisements last year, according to the financial statement it submitted to the Financial Supervisory Service in April.
Its sales revenue was 32.7 billion won in 2011, up 10-fold from a year earlier, but its net loss amounted to 66.9 billion won.

LivingSocial, the second-largest deal provider after Groupon in the United States, acquired a 100 percent stake in the Korean start-up last August and promised to retain all of its hefty Korean work force.

When asked about the company’s current financial status, however, the spokeswoman for Ticket Monster declined to comment, given that the U.S. owner is now taking steps to make an initial public offering which industry estimates put at about $1 billion.

Last year, Coupang and Ticket Monster fell under the spotlight when they hired local celebrities such as singer-actor Rain, actress Kim Tae-hee and actor Gong Yoo to serve as models. However, they said their gambits worked by raising awareness of their status as new shopping channels.

“Using expensive models was a necessary early-stage investment for us, and we are satisfied with the result,” said a spokeswoman for Coupang.

Another headache for many of the bigger companies is that they have been tarred with the same brush as smaller social commerce sites that were found to be selling counterfeit luxury goods and providing shoddy after-sales service. Recently, the top four have been scrambling to strengthen their quality controls and training of sales vendors.

“For social commerce sites to keep on growing, it is crucial they change the general perception of them into something more positive,” said Choi Yoon-jung, a researcher with Digieco, a think tank run by KT.

“Please don’t assess daily deal start-ups as you would Samsung Electronics, an enterprise that has already matured,” said Daniel Shin, CEO of Ticket Monster, in May.