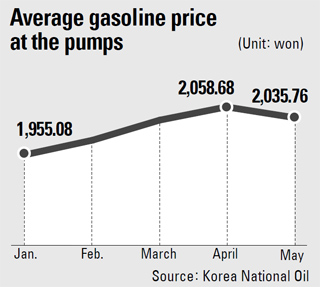 The government intends to set up a so-called altteul, or thrifty, gas station in a public parking lot in Seoul to tackle the difficulty of expanding such establishments in the metropolitan area.

In a follow-up measure to boost competition among gas stations, the Ministry of Knowledge Economy said yesterday in a release that it would establish a thrifty gas station in a public parking lot in Nowon District, northeastern Seoul in August.

The government came up with the concept of altteul gas stations last year to encourage more price competition for gasoline and diesel.

However, it is difficult to increase the number of such gas stations in Seoul as land prices are high and a large number of gas stations are operated by four oil refineries in the country.

There are only six thrifty gas stations in Seoul and there will be five more in the near future.

Samsung Total increased its production by 88,000 barrels and it plans to supply more gasoline to atteul stations.