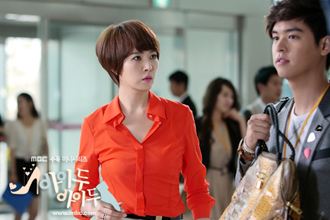 At the 18th Shanghai Television Festival held on Monday, Korean dramas won one award after another and the rights to air them were sold to various Asian broadcasters.

According to MBC, the network managed to sell broadcast rights for the midweek drama “I Do I Do” to Japan and Taiwan, despite the fact that the show hasn’t even ended its run in Korea.

In addition, the MBC weekend drama “Dr. Jin,” also currently airing, was sold to Taiwan and Thailand. “I Can’t Live Without You” and “Feast of the Gods” were sold to Japan and Thailand, respectively.

MBC said that it will make a cool $6 million from the sales.

MBC managed to win three awards. “The Moon that Embraces the Sun” won the Chinese Magnolia award, which is the equivalent of first place, in the TV series category, and “Peak” won the same award in the TV movie category.

“Tears of the Antarctic” won the coveted award for documentaries.