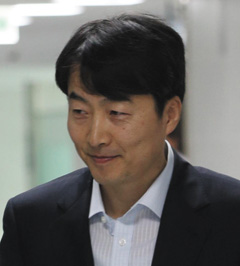 Lee had a closed-door meeting with reporters on Saturday in Yeouido, western Seoul, during which he lamented the fact that Korea lacks an official anthem, unlike countries such as the United States, known around the world for its “Star-spangled banner.”

The closest approximation Korea has is “Aegukga,” which translates as “love song for the country.” It was created in 1936 by Korean composer Ahn Eak-tai during the Japanese colonial rule. Although it was never designated as the national anthem, a presidential decree ordered people to sing it at national events in 2010, as well as at international conventions and the Olympic Games.

“We never designated ‘Aegukga’ as the national anthem,” Lee said. “It is just one of numerous songs that allow us to express our love for our country.”
Lee proposed that the Korean folk song “Arirang” be awarded the distinction.

“I think a song like ‘Arirang,’ which reflects the sadness and history of the Korean people, could be more or less called the national anthem,” Lee said. “ ‘Aegukga’ was forced on us by the administration of [former President] Chun Doo Hwan [in the 1980s].”

Most UPP members were activists in the 1970s and 1980s who railed against Chun’s administration, which cracked down on student democratization. Instead of singing “Aegukga” at party meetings, they use another song that commemorates a dead student activist.

However, the UPP is divided into various groups with different ideas about nationalism and North Korea, and not all the factions agree on demonizing “Aegukga” because of its past association with Chun.

The party’s largest faction, the so-called pro-Pyongyang Gyeonggi Dongbu Alliance, is adhering to the anti-“Aegukga” custom, while the interim leadership led by a smaller faction of the party is in the process of adopting it to mark official occasions.

Criticizing the move by the interim leadership, Lee said that forcing people to sing “Aegukga” at official events bears the hallmarks of “totalitarian rule.”

“Refusing Aegukga, which is a symbol of the Republic of Korea, is the same as refusing the national identity of the country,” the Saenuri Party spokesman Kim Young-woo said in a statement yesterday. “This whole affair feels like a bad soap opera directed by a North Korea supporter.”

The main opposition Democratic United Party, which formed an alliance with the UPP in the April 11 legislative election, urged Lee to take the song off his hit list.

“Aegukga, which reflects the public’s patriotic feelings, was approved in the legislature by a presidential decree in 2010,” DUP spokeswoman Kim Hyun said in a statement yesterday. “In that sense, it’s inappropriate to put the song at the center of controversies. We ask Lee to adhere to common sense.”

Lee Cheong-ho, a Busan-based lawmaker of the UPP, suggested Lee’s move was calculated to woo votes ahead of the party’s upcoming election. “The reason why Lee is stoking controversy over the national anthem seems to revolve around the June 29 election,” Lee wrote on his blog yesterday. “[Party members] who are labor unionists for conglomerates or those who are anti-U.S., are accustomed to refusing the legitimacy of Aegukga.”