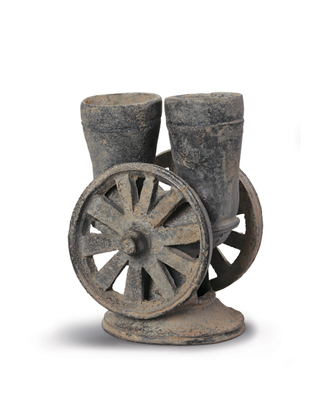 A fifth- to sixth-century pair of cups with wheels from Harvard’s Arthur M. Sackler Museum.

An eighth-century, gilt-bronze statue of a standing Buddha, a 12th-century celadon ewer with a graceful, delicate lotus design and a 19th-century water dropper in the shape of a pretty, ripe peach.

These three pieces have two things in common: They originated in Korea, but are owned by museums in the United States.

These and and 83 other pieces came home earlier this month for a special exhibition at the National Museum of Korea called “Korean Art from the United States.”

“We’ve organized this exhibition to tell the story of how Americans and American museums came to possess Korean art,” said Shin So-yeon, an official from the museum’s art division. “We also wanted visitors to get to know the Korean artworks that are representing Korea’s traditional art in the U.S.”
The items in the exhibit come with many stories, in particular how they ended up so far from home.

Left : A 16th-century painting of Sakyamuni Buddha from the Honolulu Museum of Art. right: A 12th-century celadon ewer with lotus design from the Brooklyn Museum. Provided by the National Museum of Korea


For instance, an inlaid celadon vase from the early 13th century (Goryeo era) is thought to be the first-ever Korean artifact owned by a U.S. museum. It was bought by Edward Morse (1838-1925), a zoologist and passionate collector of Japanese pottery. He sold the piece to the Museum of Fine Arts in Boston in 1892.
Officials of the Korea National Museum explain that it wasn’t until the late 19th century that U.S. collectors began to take an interest in Korean art. Until then, many bought Korean items thinking they were either Japanese or Chinese.

The most popular Korean artwork among U.S. collectors was the Goryeo celadon. After a while, interest shifted to Joseon white porcelain and Buddhist paintings.

Another interesting aspect of the exhibition is how the participating museums each seem to be saying, “We know Korean art the best.”
For instance, the Honolulu Museum of Art was the first U.S. museum to set up a gallery dedicated to Korean art when it opened in 1927. For this exhibition, it brought a wooden statue of a child attendant from the Joseon era (1392-1910) and the 16th-century painting of Sakyamuni Buddha lecturing on the Dharma, among others. Both pieces are in a photo of its Korean gallery taken when it opened. 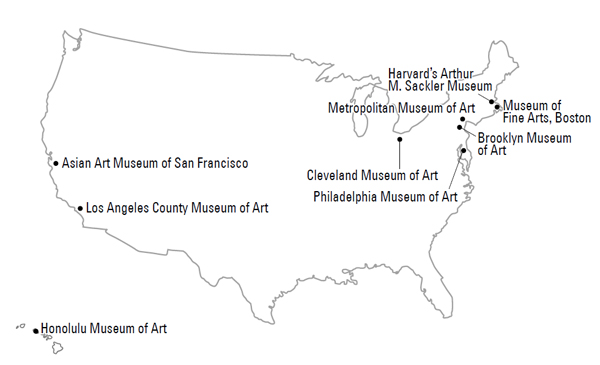 The Asian Art Museum of San Francisco in 1989 was the first to establish a Korean Art Department and appoint Korean art curators. For the exhibition, it lended the gilt-bronze statue of a standing Buddha made in the eighth century (Unified Silla Period), among other works.

Also intriguing is the involvement of foreign names that many Koreans are familiar with: the Underwoods and Severances.

A 12th-century celadon ewer from the Brooklyn Museum of Art was donated by the Underwood family, who served in Korea as missionaries and physicians at the royal court of Joseon. The organizers said that in the late 19th century, the royal family of Joseon would occasionally give gifts of artwork to foreign officials in charge of affairs related to the royal family as well as foreign envoys. 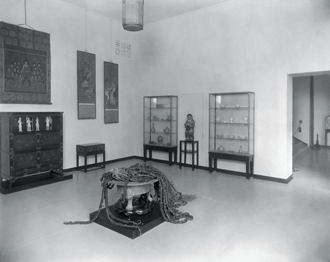 The view of the Korean Gallery at the Honolulu Museum of Art when it opened in 1927.

Also, the celadon kundika (ewer) with an incised parrot design from the Cleveland Museum of Art was a donation by John L. Severance (1863-1936), son of Louis H. Severance (1838-1913), who helped found Severance Hospital in Seoul.

According to recent data from the Cultural Heritage Administration, there are about 140,000 Korean cultural properties being kept in about 20 different countries. Japan has the most at about 66,000, while the U.S. is second with about 42,000.


* “Korean Art from the United States” will be held until Aug. 5 at the National Museum of Korea in Yongsan District, central Seoul. Admission is free. There are guided tours on Wednesday evenings. The museum is open until 9 p.m. on Wednesdays and Saturdays, and 7 p.m. on Sundays. Otherwise, it is open until 6 p.m. The museum is closed on Mondays. To get to the museum, go to Ichon Station, line No. 4, exit 2. For more information, visit www.museum.go.kr or call (02) 2077-9000.